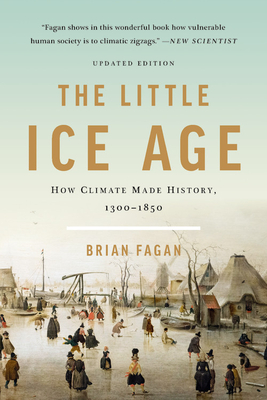 Only in the last decade have climatologists developed an accurate picture of yearly climate conditions in historical times. This development confirmed a long-standing suspicion: that the world endured a 500-year cold snap -- The Little Ice Age -- that lasted roughly from A.D. 1300 until 1850. The Little Ice Age tells the story of the turbulent, unpredictable and often very cold years of modern European history, how climate altered historical events, and what they mean in the context of today's global warming. With its basis in cutting-edge science, The Little Ice Age offers a new perspective on familiar events. Renowned archaeologist Brian Fagan shows how the increasing cold affected Norse exploration; how changing sea temperatures caused English and Basque fishermen to follow vast shoals of cod all the way to the New World; how a generations-long subsistence crisis in France contributed to social disintegration and ultimately revolution; and how English efforts to improve farm productivity in the face of a deteriorating climate helped pave the way for the Industrial Revolution and hence for global warming. This is a fascinating, original book for anyone interested in history, climate, or the new subject of how they interact.

Brian Fagan is Emeritus Professor of Anthropology at the University of California, Santa Barbara. A former Guggenheim Fellow, he has written many internationally acclaimed popular books about archaeology, including The Little Ice Age, The Great Warming, and The Long Summer. He lives in Santa Barbara, California.