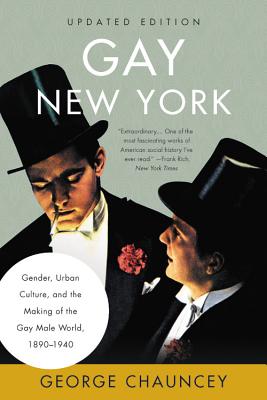 By  George Chauncey
Paperback
$ 22.99
Out of Stock In Store

The award-winning, field-defining history of gay life in New York City in the early to mid-20th century

Gay New York brilliantly shatters the myth that before the 1960s gay life existed only in the closet, where gay men were isolated, invisible, and self-hating. Drawing on a rich trove of diaries, legal records, and other unpublished documents, George Chauncey constructs a fascinating portrait of a vibrant, cohesive gay world that is not supposed to have existed. Called "monumental" (Washington Post), "unassailable" (Boston Globe), "brilliant" (The Nation), and "a first-rate book of history" (The New York Times), Gay New Yorkforever changed how we think about the history of gay life in New York City, and beyond.

George Chauncey is professor of American history at the University of Chicago and the author of Gay New York: Gender, Urban Culture, and the Making of the Gay Male World, 1890-1940, which won the distinguished Turner and Curti Awards from the Organization of American Historians, the Los Angeles Times Book Prize, and the Lambda Literary Award.

He testified as an expert witness on the history of antigay discrimination at the 1993 trial of Colorado's Amendment Two, which resulted in the Supreme Court's Romer v. Evans decision that antigay rights referenda were unconstitutional, and he was the principal author of the Historians' Amicus Brief, which weighed heavily in the Supreme Court's landmark decision overturning sodomy laws in Lawrence v. Texas (2003). The recipient of a Guggenheim Fellowship, he lives and works in Chicago.