Illegal: How America's Lawless Immigration Regime Threatens Us All 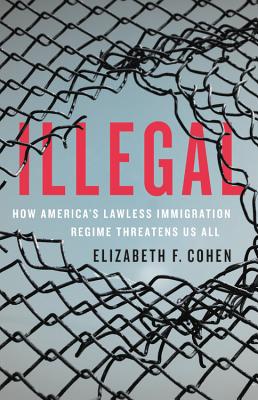 Illegal: How America's Lawless Immigration Regime Threatens Us All

By  Elizabeth F. Cohen
$ 28.00
Out of Stock In Store (Click to Order)
A political scientist explains how the American immigration system ran off the rails -- and proposes a bold plan for reform

Under the Trump administration, US immigration agencies terrorize the undocumented, target people who are here legally, and even threaten the constitutional rights of American citizens. How did we get to this point?

In Illegal, Elizabeth F. Cohen reveals that our current crisis has roots in early twentieth century white nationalist politics, which began to reemerge in the 1980s. Since then, ICE and CBP have acquired bigger budgets and more power than any other law enforcement agency. Now, Trump has unleashed them. If we want to reverse the rising tide of abuse, Cohen argues that we must act quickly to rein in the powers of the current immigration regime and revive saner approaches based on existing law. Going beyond the headlines, Illegal makes clear that if we don't act now all of us, citizen and not, are at risk.

Elizabeth F. Cohen is a professor of political science at the Maxwell School of Citizenship and Public Affairs at Syracuse University. The author of The Political Value of Time, she lives in New York City.