The Groom Will Keep His Name: And Other Vows I've Made About Race, Resistance, and Romance 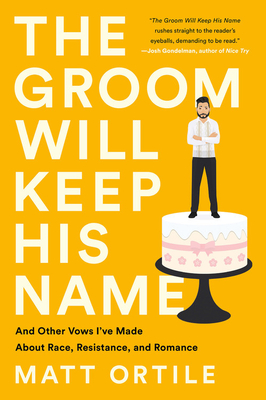 The Groom Will Keep His Name: And Other Vows I've Made About Race, Resistance, and Romance

By  Matt Ortile
$ 16.99
Out of Stock In Store (Click to Order)
A riotous collection of "witty and captivating" essays by a gay Filipino immigrant in America who is learning that everything is about sex (Bitch Magazine) -- and sex is about power.
When Matt Ortile moved from Manila to Las Vegas, the locals couldn't pronounce his name. Harassed as a kid for his brown skin, accent, and femininity, he believed he could belong in America by marrying a white man and shedding his Filipino identity. This was the first myth he told himself. The Groom Will Keep His Name explores the various tales Ortile spun about what it means to be a Vassar Girl, an American Boy, and a Filipino immigrant in New York looking to build a home.
As we meet and mate, we tell stories about ourselves, revealing not just who we are, but who we want to be. Ortile recounts the relationships and whateverships that pushed him to confront his notions of sex, power, and the model minority myth. Whether swiping on Grindr, analyzing DMs, or cruising steam rooms, Ortile brings us on his journey toward radical self-love with intelligence, wit, and his heart on his sleeve.
Matt Ortile is the managing editor of Catapult. His writing has been published by BuzzFeed, Into, Self, and Out, among others. He lives in Brooklyn.