The South Pole: Complete and Unabridged with Illustrations, Charts, Maps and Appendices 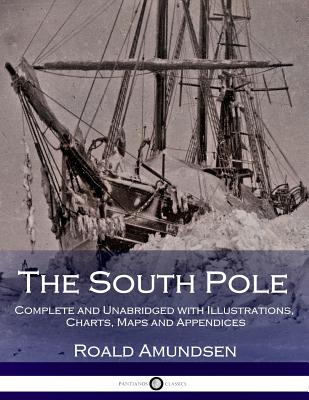 The South Pole: Complete and Unabridged with Illustrations, Charts, Maps and Appendices

Translator  Arthur G. Chater , Roald Amundsen
Paperback
$ 10.48
Out of Stock In Store (Click to Order)
This item may not be available to order. Please call 617-566-6660 for more information.

This superb edition of The South Pole contains all of the original and essential photographs, charts, maps and appendices from the Amundsen expedition.
This book chronicles the epic journey of Roald Amundsen and his team of hand-picked sailors, from the moment the journey was conceived to the triumphant conclusion and acclaim. The South Pole remains a classic chronicle of exploration and adventure for its detail, descriptions and thoroughness. Amundsen successfully captures both the moments of excitement and action, the day-to-day struggles, and the routines undertaken by the men who undertook the dangerous journey.
In the detailed chapters, we hear of the difficulties the men encountered during their crossing of the icy wastes of the Antarctic. Amundsen's first expedition - which almost ended in fatal disaster - is much detailed, as are the valuable lessons the team picked up in this perilous brush with death. The painstaking preparations and establishment of the base camp is noted, while Amundsen's use of sled dogs and skis are demonstrated as vital for the group's eventual success.
The expedition was imperiled by the limits of their technology; including clothes comprised of animal furs; their ship - the Fram - whose ice-breaking capacities were far inferior to those of the modern day; and the lack of sophisticated navigation tools. Furthermore the route which Amundsen took was across the previously uncharted Axel Heiberg Glacier; fortuitously, the flatter terrain offered a straightforward means of passage.
The moment of triumph as the group finally reached the South Pole of the Earth is tempered by the reminder that they must traverse the glacier again on the return trip. Several of the sled dogs were killed for their meat during the trek home. Remarkably there were no human fatalities, a fact which only increased the admiration and laudatory sentiments from the leaders of the time.
The Amundsen expedition was one of the most famous of its era, being as it marked the first time a human had ever reached the South Pole. Tragically the rival Scott expedition - which ran concurrently with Amundsen's - resulted in the death of most of the expedition members, including Scott himself.