How to Win Friends and Influence Enemies: Taking On Liberal Arguments with Logic and Humor 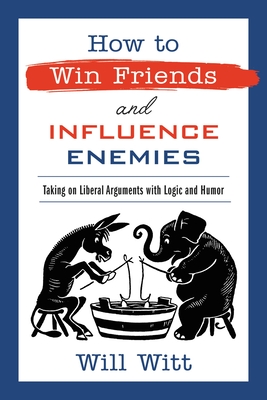 How to Win Friends and Influence Enemies: Taking On Liberal Arguments with Logic and Humor

By  Will Witt
Hardcover
$ 29.00
Out of Stock In Store (Available to Order)

Political commentator and media personality Will Witt gives young conservatives the ammunition they need to fight back against the liberal media in this instant national bestseller.

Popular culture in America today is dominated by the left. Most young people have never even heard of conservative values from someone their age, and if they do, the message is often bland and outdated. Almost every Hollywood actor, musician, media personality, and role model for young people in America rejects conservative values, and Gen Zs and millennials are quick to regurgitate these viewpoints without developing their own opinions on issues.

So many young conservatives in America want to stand up for their beliefs in their classrooms, at their jobs, with their friends, or on social media, but they don't have the tools to do so. In How to Win Friends and Influence Enemies, Will Witt arms Gen Zs and millennials with the knowledge and skills to combat the leftist narrative they hear every day.

Will Witt is a media personality, national speaker, short film director, cultural commentator, and host of the show Will Witt Live on PragerU. A college dropout, Will Witt moved to Los Angeles to pursue a career in media and politics. In the span of a year and a half, Will Witt has amassed over five hundred million views of his online videos and is one of the most viewed conservative media personalities in America. Will Witt’s first mini documentary, Fleeing California, has been viewed over seven million times. He has made frequent appearances on Fox News, The Daily Wire, and Blaze Media. He was featured on the cover of the New York Times, which discussed the massive impact he and PragerU have had on America. He lives in Los Angeles.