Broken News: Why the Media Rage Machine Divides America and How to Fight Back 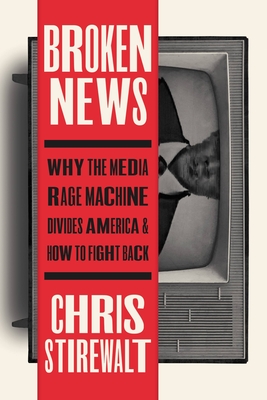 Broken News: Why the Media Rage Machine Divides America and How to Fight Back

A former Fox News political editor reveals how news organizations have succumbed to the temptation of “rage revenue” through slanted coverage that drives political division and rewards outrageous conduct.

In Broken News, Chris Stirewalt, celebrated as one of America’s sharpest political analysts in print and on television, employs his trademark wit and insight to give readers an inside look at these problems. He explains that these companies don’t reward bad journalism because they like it, but because it is easy and profitable.

Take it from Stirewalt: As a top editor and election forecaster on Fox News’ decision desk during the 2020 election, he knows firsthand what happens when viewers (including the president of the United States) become more accustomed to flattery and less willing to hear news that punctures their bubbles.

Broken News is a fascinating, deeply researched, conversation-provoking study of how the news is made and how it must be repaired, with surprising takeaways about who’s to blame. Stirewalt goes deep inside the history of the industry to explain how today’s media divides America for profit. And he offers practical advice for how everyday readers, listeners and viewers can (and should) become better news consumers for the sake of the republic.

This is a book for those who care about our country—and want the news to do the news again.

Chris Stirewalt is a political columnist, author and former political editor for the Fox News Channel, where he served on the election night decision desk, helped coordinate political coverage across the network, and frequently provided on-air analysis. He is a senior fellow at the American Enterprise Institute (AEI), where he focuses on American politics, public opinion, and the media. He is a contributing editor and columnist for The Dispatch and co-hosts a media criticism podcast, Ink Stained Wretches. He is the author of Every Man a King: A Short, Colorful History of American Populists (Twelve Books, 2018), in which he looks at American populism through the lives of seven famous populists.