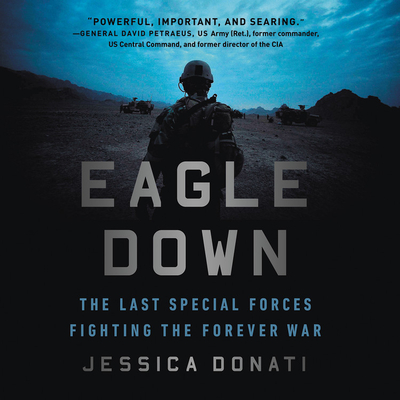 By  Jessica Donati , Read by  Brittany Pressley
Pre-recorded digital audio pla
$ 54.99
Unavailable
Selected as a "BUZZ BOOK" for Fall/Winter (Publishers Lunch)
The Wall Street Journal's national security reporter-formerly based in Kabul from 2013-2017-takes readers into the lives of U.S. Special Forces on the front lines against the Taliban and Islamic State, where a new and covert war is keeping Afghanistan from collapse.
In 2015, the White House claimed triumphantly "the longest war in American history is over." But for some, it was just the beginning of a new and covert war, fought far from public view, with limited resources, little governmental oversight, and contradictory orders.
Take Hutch, a battle-worn Green Beret on his fifth combat tour in 2015, tasked with a high-stakes mission: lead a small band of men into Kunduz, recapture the city from the Taliban, and turn it over to the Afghan government. The U.S. role was meant to be a secret-after all, the war was over. Then, disaster struck. He called in an airstrike on a Doctors Without Borders hospital, killing dozens of doctors and patients.
Or Caleb, who stepped on a bomb during a raid on a Taliban hideout in notorious Sangin. Or Andy, trapped in Marjah with a crashed Black Hawk and no air support. From Hutch to Caleb to Andy, Eagle Down is a dramatic and intimate portrayal of this ongoing forgotten war that moves from the desperate battlegrounds in muddy Afghan villages all the way to the White House.
Pulitzer Prize Finalist Jessica Donati, with big picture insight and on-the-ground grit, reveals how America came to rely on U.S. Special Forces, through successive policy directives that ramped up the war under the Obama and Trump administrations. Donati argues the covert war is failing to stabilize Afghanistan, and without a long-term plan, is undermining U.S. interests both at home and abroad.
Relying on Donati's daring on-the-ground reporting, first-hand accounts from Special Forces, military documents, and declassified reports, Eagle Down is an account of the heroism, sacrifice, and tragedy experienced by those that continue to fight America's longest war.

Jessica Donati covers foreign affairs for The Wall Street Journal in Washington DC, and has reported from over a dozen countries in the role. She joined the paper as the bureau chief in Kabul in 2015, and lived in Afghanistan for over four years. Previously, she worked for Reuters in Europe, the Middle East and Asia, covering both the conflicts in Libya and Afghanistan. She co-authored a series on the war in Libya that was chosen as a finalist for the Pulitzer Prize for International Reporting in 2012. She is also the recipient of a New York Press Club award for her reporting in Libya . She is British-Italian, and grew up in Italy. She lives with her husband and son in Washington DC.