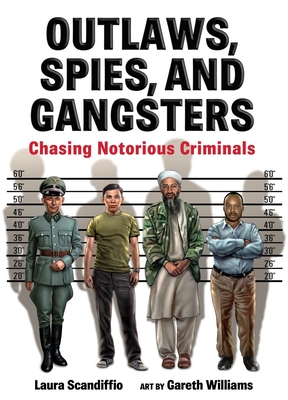 Experience all the thrills and suspense of chasing down the world's highest-profile criminals. What does it take to catch a criminal? Not just any criminal, but one of the world's most wanted? In Outlaws, Spies, and Gangsters, Laura Scandiffo chronicles eight of history's most famous manhunts, from searches for drug dealers to dictators, hackers to henchmen. Discover the danger and intrigue behind these riveting stories of daring and perseverance. Read about the great lengths authorities went to, to catch: - Albert "Mad Trapper" Johnson, an unpredictable and violent fugitive in Canada's Northwest Territories - Bank robber and escape artist extraordinaire John Dillinger, America's frst "Public Enemy Number One" - Manuel Noriega, Panama's corrupt and tyrannical president - CIA mole Aldrich Ames, whose longing for the high life led to the disappearances and murders of many of his fellow colleagues - Vladimir Levin, the world's frst high-profle computer hacker - Osama bin Laden, the terrorist who became a household name after the attacks of September 11, 2001. An introduction and afterword help frame these remarkable stories, which also address how manhunts have changed over time. Gareth Williams' bright, dramatic art makes each exciting tale jump off the page.

Laura Scandiffio has written many non-fiction books for young readers, including "Escapes!" in the True Stories from the Edge series and, most recently, the award-winning "People Who Said No." She lives with her family in Toronto, Ontario. Gareth Williams is the illustrator of the Red Maple Award-shortlisted "The Adventures of Medical Man." He lives in South Africa.