The Disobedience of the Daughter of the Sun: A Mayan Tale of Ecstasy, Time, and Finding One's True Form 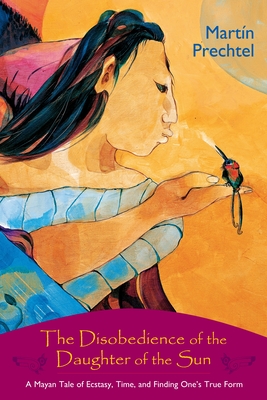 The Disobedience of the Daughter of the Sun: A Mayan Tale of Ecstasy, Time, and Finding One's True Form

Author and illustrator Martín Prechtel is internationally known for his explorations of ancient folklore and uncovering the lessons therein for modern readers. In The Disobedience of the Daughter of the Sun, he revives a hitherto unknown Guatemalan Tzutujil Mayan tale of the beginnings of the world with a poetic retelling of the story, 28 evocative drawings, and a critical analysis that both enlightens and entertains. Having lived with the Mayans and learned their language, Prechtel authoritatively retells the powerful tale of the Tall Girl who weaves the world in a loom, her parents the Sun and the Moon who repudiate her suitors, and the mysterious man who disguises himself as a hummingbird to lure her away. Prechtel expands this archetypal story with five layers of commentary, each teasing out a different wisdom and revealing its relevance to the world today.

A master of eloquence and innovative language, Martín Prechtel is a leading thinker, writer, and teacher whose work, both written and oral, brings to life the pre-modern subtleties of any living language. His life, well documented in his books, has taken him from the Pueblo Indian reservation in New Mexico, where he grew up, to the Guatemalan village of Santiago Atitlan, where he was the student and eventual successor of a powerful shaman. Eventually Prechtel became a principal member of the village body of spiritual leaders, responsible for introducing the young people to the meanings of their ancient stories and guiding them through their long rituals of initiation. Today Martín Prechtel lives once again in his native New Mexico and is active as a writer, teacher, speaker, musician, and healer. Using ceremony, language, story, and healing he helps people in many lands reconnect with a sense of place, a sense of the daily sacred, and their search for the Indigenous Soul.