Written in Exile: The Poetry of Liu Tsung-Yuan 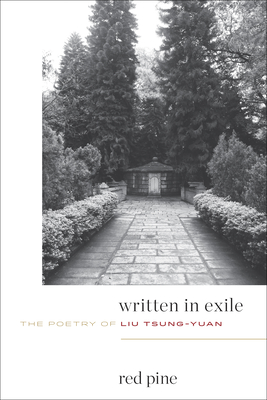 Written in Exile: The Poetry of Liu Tsung-Yuan

After a failed push for political reform, the T'ang era's greatest prose-writer, Liu Tsung-yuan, was exiled to the southern reaches of China. Thousands of miles from home and freed from the strictures of court bureaucracy, he turned his gaze inward and chronicled his estrangement in poems. Liu's fame as a prose writer, however, overshadowed his accomplishment as a poet. Three hundred years after Liu died, the poet Su Tung-p'o ranked him as one of the greatest poets of the T'ang, along with Tu Fu, Li Pai, and Wei Ying-wu. And yet Liu is unknown in the West, with fewer than a dozen poems published in English translation. The renowned translator Red Pine discovered Liu's poetry during his travels throughout China and was compelled to translate 140 of the 146 poems attributed to Liu. As Red Pine writes, "I was captivated by the man and by how he came to write what he did." Appended with thoroughly researched notes, an in-depth introduction, and the Chinese originals, Written in Exile presents the long-overdue introduction of a legendary T'ang poet.

Bill Porter (aka Red Pine) was born in Van Nuys, California in 1943 and grew up in Northern Idaho. After a tour of duty in the US Army 1964-67, he attended UC Santa Barbara and majored in Anthropology. In 1970, he entered graduate school at Columbia University and studied anthropology with a faculty that included Margaret Mead and Ruth Benedict. While he was living in New York, he became interested in Buddhism, and in 1972 he left America and moved to a Buddhist monastery in Taiwan. After more than three years with the monks and nuns, he struck out on his own and supported himself by teaching English and later by working as a journalist at English-language radio stations in Taiwan and Hong Kong. During this time, he married a Chinese woman, had two children, and began working on translations of Chinese poetry and Buddhist texts. In 1993, he returned to America so his children could learn English. For the past twenty years, he has worked as an independent scholar and has supported himself from book royalties and lecture fees. His translations have been honored with a number of awards, including two NEA translation fellowships, a PEN translation award, the inaugural Asian Literature Award of the American Literary Translators Association, a Guggenheim Fellowship, and in 2018 the Thornton Wilder Prize for Translation bestowed by the American Academy of Arts and Letters. He lives in Port Townsend, Washington.