Flying the Beam: Navigating the Early US Airmail Airways, 1917-1941 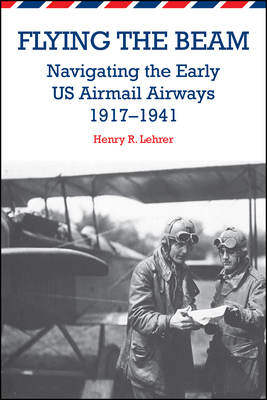 Flying the Beam: Navigating the Early US Airmail Airways, 1917-1941

With air travel a regular part of daily life in North America, we tend to take the infrastructure that makes it possible for granted. However, the systems, regulations, and technologies of civil aviation are in fact the product of decades of experimentation and political negotiation, much of it connected to the development of the airmail as the first commercially sustainable use of airplanes. From the lighted airways of the 1920s through the radio navigation system in place by the time of World War II, this book explores the conceptualization and ultimate construction of the initial US airways systems.The daring exploits of the earliest airmail pilots are well documented, but the underlying story of just how brick-and-mortar construction, radio research and improvement, chart and map preparation, and other less glamorous aspects of aviation contributed to the system we have today has been understudied. Flying the Beam traces the development of aeronautical navigation of the US airmail airways from 1917 to 1941. Chronologically organized, the book draws on period documents, pilot memoirs, and firsthand investigation of surviving material remains in the landscape to trace the development of the system. The author shows how visual cross-country navigation, only possible in good weather, was developed into all-weather "blind flying." The daytime techniques of "following railroads and rivers" were supplemented by a series of lighted beacons (later replaced by radio towers) crisscrossing the country to allow nighttime transit of long-distance routes, such as the one between New York and San Francisco.Although today's airway system extends far beyond the continental US and is based on digital technologies, the way pilots navigate from place to place basically uses the same infrastructure and procedures that were pioneered almost a century earlier. While navigational electronics have changed greatly over the years, actually "flying the beam" has changed very little.

Henry R. Lehrer is an airline transport-rated pilot (jet type-rating) and certified flight instructor (instrument and multi-engine), with over 3,000 hours of flight time. He also has over fifty years of education experience, including both teaching and administration. Lehrer has guided students ranging from elementary schoolchildren to professionals completing advanced graduate degrees. He holds bachelor's and master's degrees in secondary education and a PhD in higher education administration. As well as writing numerous journal articles, book chapters, and professional papers, he has founded and edited several refereed scholarly journals in the aviation field. The author spent a significant part of his life along the pathway that was the Transcontinental Airway, the air corridor that stretched from New York City through Cleveland, Chicago, Omaha, Salt Lake City, Reno, and terminated in San Francisco.