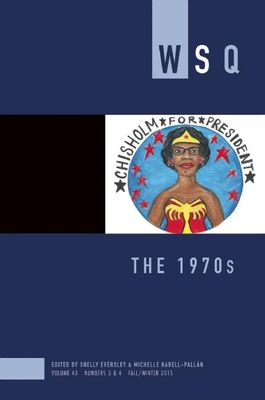 Editor  Shelly Eversley , Michelle Habell-Pallán
$ 25.00
Out of Stock In Store (Available to Order)

The social and cultural agendas developed in the 1970s continue to haunt and inspire. Grassroots feminist culture blossomed, taking cues from activists, writers, and scholars. This special issue of WSQ invites scholars, artists, and activists to reflect on the decade's wide-ranging accomplishments, its unfinished agendas, and its influence on the contemporary moment.

Shelly Eversley is associate professor of English at Baruch College specializing in twentieth century American and African American literature and culture as well as gender, sexuality, and visual studies.

Michelle Habell-Pallan is a professor of Chicana/Latina studies in the department of gender, women and sexuality studies and adjunct in the School of Music and Communication at the University of Washington.