We've Got a Job: The 1963 Birmingham Children's March 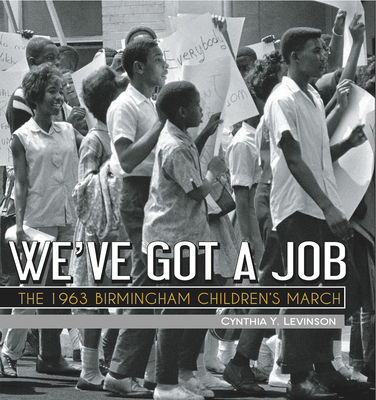 We've Got a Job: The 1963 Birmingham Children's March

By  Cynthia Levinson
Paperback
$ 13.95
Likely On Our Shelves

The inspiring story of the 1963 Birmingham Children's March as seen through the eyes of four young people at the center of the action.

The 1963 Birmingham Children's March was a turning point in American civil rights history. Black Americans had had enough of segregation and police brutality, but with their lives and jobs at stake, most adults were hesitant to protest the city's racist culture. So the fight for civil rights lay in the hands of children like Audrey Hendricks, Wash Booker, James Stewart, and Arnetta Streeter.

We've Got a Job tells the little-known story of the four thousand Black elementary, middle, and high school students who answered Dr. Martin Luther King's call to "fill the jails." Between May 2 and May 11, 1963, these young people voluntarily went to jail, drawing national attention to the cause, helping bring about the repeal of segregation laws, and inspiring thousands of other young people to demand their rights.

Drawing on her extensive research and in-depth interviews with participants, award-winning author Cynthia Levinson recreates the events of the Birmingham Children's March from a new and very personal perspective. Archival photography and informational sidebars throughout. Back matter includes an afterword, author's note, timeline, map, and bibliography.

A former teacher and educational policy consultant and researcher, Cynthia Levinson is the author of numerous award-winning nonfiction books about social justice for young readers,. She holds degrees from Wellesley College and Harvard University and also attended the Lyndon B. Johnson School of Public Affairs. She divides her time between Austin, Texas, and Boston, Massachusetts.