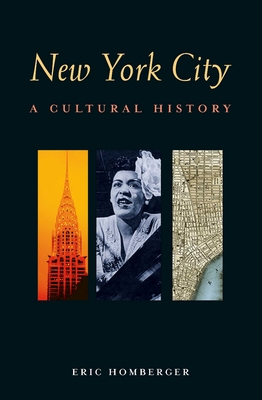 By  Eric Homberger
Paperback
$ 15.00
Out of Stock In Store (Click to Order)

New York City epitomizes modernity. Its skyscrapers and neon nightlife, together with its inner-city ghettoes, symbolize all the excitements and tribulations of contemporary urban living. But the city's powerful contemporary presence is also built upon a dramatic history. Settled by Dutch traders, seized at gunpoint by an English fleet, its development into a mega-city reveals a story as astounding as any in American history. Home to generations of migrants, an international center of finance and fashion, New York is a world city both entrepreneurial and self-promoting. Eric Homberger explores the rich contribution New York has made to American history and culture. Birthplace of Herman Melville, Henry James, and Joseph Heller and adopted home of poets, playwrights, artists, and radicals from every continent, the city has been relentless in overturning cultural conventions. From jazz to hip-hop, from art deco to modernism, New York has always been at the forefront of innovation. - City of power and ambition: Wall Street and the heart of US capitalism; the UN and global politics; Ellis Island and the eternal migrant dream. - City of drama, art, and music: Broadway; Tin Pan Alley and the bright lights; museums and art collections; orchestras, opera, and the power of popular culture. - City of writers and visionaries: migr intellectuals and dissidents; novelists and poets; chroniclers of urban life and voices of the dispossessed.