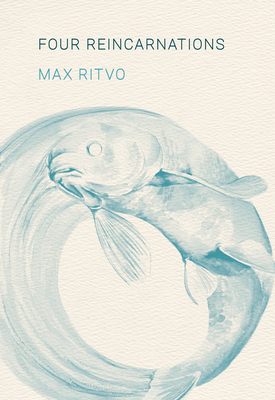 Reverent and profane, entertaining and bruising, Four Reincarnations is a debut collection of poems that introduces an exciting new voice in American letters.

When Max Ritvo was diagnosed with cancer at age sixteen, he became the chief war correspondent for his body. The poems of Four Reincarnations are dispatches from chemotherapy beds and hospitals and the loneliest spaces in the home. They are relentlessly embodied, communicating pain, violence, and loss. And yet they are also erotically, electrically attuned to possibility and desire, to "everything living / that won't come with me / into this sunny afternoon." Ritvo explores the prospect of death with singular sensitivity, but he is also a poet of life and of love--a cool-eyed assessor of mortality and a fervent champion for his body and its pleasures. Ritvo writes to his wife, ex--lovers, therapists, fathers, and one mother. He finds something to love and something to lose in everything: Listerine PocketPak breath strips, Indian mythology, wool hats. But in these poems--from the humans that animate him to the inanimate hospital machines that remind him of death--it's Ritvo's vulnerable, aching pitch of intimacy that establishes him as one of our finest young poets.

Max Ritvo (1990-2016) wrote Four Reincarnations in New York and Los Angeles over the course of a long battle with cancer. He was also the author of the chapbook AEONS, chosen by Jean Valentine to receive the Poetry Society of America Chapbook Fellowship in 2014. Ritvo's poetry has appeared in the New Yorker, Poetry, and the Boston Review, and as a Poem-a-Day for Poets.org. His prose and interviews have appeared in publications such as Lit Hub, Divedapper, Huffington Post, and the Los Angeles Review of Books.