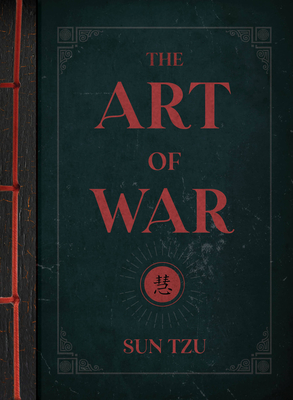 Featuring the Chinese text on the left and the English translation on the right, this beautifully bound edition of Sun Tzu’s classic text makes a unique gift or collector's item.

Written in the sixth century BCE, Sun Tzu’s The Art of War is still widely read and consulted today for its timeless, piercing insights into strategy and tactics. Napoleon, Mao Zedong, General Vo Nguyen Giap, and General Douglas MacArthur all claimed to have drawn inspiration from it. Beyond the world of war, business and management gurus have also applied Sun Tzu’s ideas to office politics and corporate strategy.

This edition of The Art of War is printed on high-quality paper and bound by traditional Chinese book-making techniques. It contains the full 13 chapters on such topics as laying plans, attacking by stratagem, weaponry, terrain, and the use of spies. Sun Tzu addresses different campaign situations, marching, energy, and how to exploit your enemy's weaknesses.

This edition is an essential addition to any library, whether you’re fascinated by the philosophy of warfare, Chinese history, or even twenty-first-century business.

Sun Tzu (c. 6th century BCE) was a Chinese general whose life is shrouded in mystery. It is believed that he served King Helu of Wu, and that he rose to fame as a result of his successful military exploits. Today he is a legendary figure in Asia, and his works are cited in every discipline from sports to politics in the West.

Lionel Giles (1875 – 1958) was a British sinologist, writer, and philosopher. Lionel Giles served as assistant curator at the British Museum and Keeper of the Department of Oriental Manuscripts and Printed Books. Giles is most notable for his 1910 translation of The Art of War by Sun Tzu and The Analects of Confucius.