The Superhero Book: The Ultimate Encyclopedia of Comic-Book Icons and Hollywood Heroes 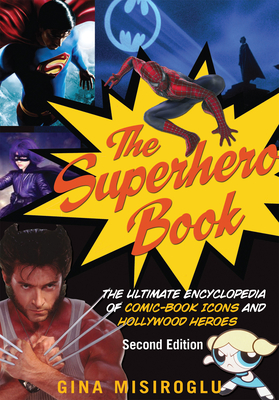 The Superhero Book: The Ultimate Encyclopedia of Comic-Book Icons and Hollywood Heroes

The ultimate compendium to everyone's favorite participants in the eternal battle between good and evil Profiles of more than 1,000 mythic superheroes, icons, and their place in popular culture.

Superhuman strength. Virtual invulnerability. Motivated to defend the world from criminals and madmen. Possessing a secret identity. And they even have fashion sense--they look great in long underwear and catsuits. These are the traits that define the quintessential superhero. Their appeal and media presence has never been greater, but what makes them tick? their strengths? weaknesses? secret identities and arch-enemies? The Superhero Book: The Ultimate Encyclopedia of Comic-Book Icons and Hollywood Heroes is the comprehensive guide to all those characters whose impossible feats have graced the pages of comic books for the past one hundred years.

From the Golden and Silver Ages to the Bronze and Modern Ages, the best-loved and most historically significant superheroes--mainstream and counterculture, famous and forgotten, best and worst--are all here: The Avengers Batman and Robin Captain America Superman Wonder Woman Captain Marvel Spider-Man The Incredibles The Green Lantern Iron Man Catwoman Wolverine Aquaman Hellboy Elektra Spawn The Punisher Teen Titans The Justice League The Fantastic Four

and hundreds of others.

Unique in bringing together characters from Marvel, DC, and Dark Horse, as well as smaller independent houses, The Superhero Book covers the best-loved and historically significant superheroes across all mediums and guises, from comic book, movie, television, and graphic novels. With many photos and illustrations this fun, fact-filled tome is richly illustrated. A bibliography and extensive index add to its usefulness. It is the ultimate A-to-Z compendium of everyone's favorite superheroes, anti-heroes and their sidekicks, villains, love interests, superpowers, and modus operandi.

Gina Misiroglu has authored or edited more than three dozen books in the popular culture, biography, American history, folklore, and women's studies genres. She is the editor of the Encyclopedia of Women and American Popular Culture, which explores women's contributions to film, television, comics, music, fashion, and graphic art. Misiroglu was the co-editor of the first edition of The Superhero Book and its companion title The Supervillain Book, both of which received numerous accolades from the comics and film communities, including a Top Picks selection from SCOOP. She is a frequent speaker at the San Diego Comic-Con, where she moderates panels for the Comics Arts Conference, a gathering of scholars who publish in the American studies and popular culture genres.