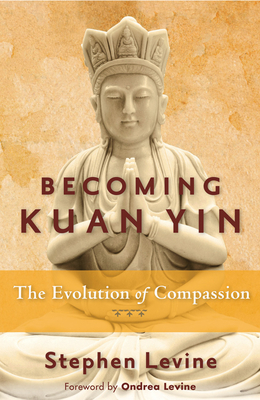 By  Stephen Levine , Foreword by  Ondrea Levine
$ 16.95
Out of Stock In Store

In his long career as a poet, Buddhist teacher, spiritual advisor, and writer, Stephen Levine has changed our understanding of death and dying. In Becoming Kuan Yin, Levine's first new book in many years, he turns to the legend of Kuan Yin, the Bbodhistitva venerated by East Asian Buddhists for her compassion.

In Becoming Kuan Yin, Levine shares the tale of Miao Shan, born centuries ago to a cruel king who wanted her to marry a wealthy but uncaring man. This is the story of how Miao Shan refused to follow the path her father had in mind and, instead, became Kuan Yin, the first acknowledged female Buddha who watches over the dying and those who work with them.

Levine weaves together story and practice and helps readers discover their own infinite capacity for mercy and compassion under difficult circumstances. This book will have resonance for Kuan Yin's millions of followers.

Stephen Levine is an American poet, author ,and teacher best known for his work on death and dying. He is one of a generation of pioneering teachers who, along with Jack Kornfield, Joseph Goldstein, Ram Dass, and Sharon Salzberg, who have made the teachings of Theravada Buddhism more widely available to students in the West. He is the author of Who Dies?, Healing into Life and Death, and Turning Toward the Mystery. Visit him at www.levinetalks.com.
Ondrea Levine and Stephen Levine are close collaborators in teaching, in practice, in life. Together they are the authors of more than eight books, some of which bear Stephen's name only as author, but all of which Ondrea had a hand in. Together they are best known for their work on death and dying. They are also the parents of Buddhist teacher and writer Noah Levine. Visit them online at www.levinetalks.com.