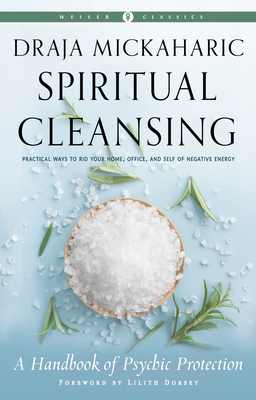 By  Draja Mickaharic , Foreword by  Lilith Dorsey
Paperback
$ 16.95
Pre-Order (Not Yet Published)

The classic spiritual first-aid manual for psychic self-protection -- filled with hundreds of recipes, rituals, and practical ways to cleanse your home, office, and self of negative energy.

Spiritual Cleansing is an essential guide for anyone who wants to keep their lives and their environment spiritually clean and protected.
In it, the author shows how to:

First published by Weiser in 1982, this Weiser Classic edition includes a new foreword by Lilith Dorsey, author of Orishas, Goddesses, and Voodoo Queens

Draja Mickaharic has been practicing magic for more than 45 years. He is the author of A Century of Spells and The Practice of Magic. He lives in Philadelphia.

Lilith Dorsey, MA, hails from many magickal traditions, including Celtic, Afro-Caribbean, and Native American spirituality. Her traditional education focused on plant science, anthropology, and film at the University of Rhode Island, New York University, and the University of London, and her magickal training includes numerous initiations in Santeria, also known as Lucumi, Haitian Vodoun, and New Orleans Voodoo. She has been a professional psychic for over three decades. Lilith is a frequent presenter at festivals and gatherings, including the Sirius Rising Festival, Sankofa Fest, New York City’s Pagan Pride Day, and the Earth Warriors Festival. She is a regular guest on several Pagan blogtalk radio shows.