Marvelous Manhattan: Stories of the Restaurants, Bars, and Shops That Make This City Special 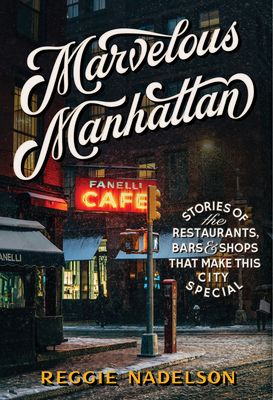 Marvelous Manhattan: Stories of the Restaurants, Bars, and Shops That Make This City Special

“A timely read. . . . [Nadelson’s] reporting, all from a personal lens, is up-to-date. . . . Like chocolate chips in a cookie, the book is studded with delicious photos old and new.”
—Florence Fabricant, New York Times

“A wonderfully lively, knowledgeable journey through the past and present of places that help make New York City what it is, and which we must cherish and (hopefully) preserve.”
—Salman Rushdie

New York might have Broadway, Times Square, and the Empire State Building, but the real heart and soul of the city can be found in the iconic places that have defined cool since “cool” became a word.

Places like Di Palo’s in Little Italy, where you might stop in to pick up a little cheese only to find yourself in a long conversation—part friendly chat, part profound tutorial—with fourth-generation owner Lou Di Palo, sampling cheeses all the while. Or Raoul’s in SoHo, to enjoy a classic steak-frites in the company of downtown artists, celebrities, and dyed-in-the-wool locals. Or Minton’s Playhouse in Harlem, to be in the room where some young guys named Thelonious, Dizzy, and Charlie invented bebop. Or maybe Russ & Daughters, to pick up the city’s best lox and bagels, which they’ve been selling since 1914.

A lifelong New Yorker, writer Reggie Nadelson celebrates her city and all the places that make it special. Part guidebook, part cultural history, part walk down memory lane, alive with the spirit and the grit of small, often family-owned businesses that have survived the Great Depression, World War II, 9/11, and the coronavirus lockdown, Marvelous Manhattan is a seductive and timely book for anyone who lives in New York, loves the city, lived there once, or wishes they had.

Because that’s the thing about Manhattan: all you need to do is walk into the right place—say, Fanelli’s on Prince Street—sit down at the bar, order a drink, open this book, and suddenly you’re a New Yorker.

Reggie Nadelson lives in New York and currently writes a column for the New York Times called The 212. She has also written columns for the Guardian, the Independent, the Financial Times, and Departures. She is the author of numerous books, including At Balthazar, a celebrated mystery series featuring detective Artie Cohen, and Comrade Rockstar. Last year she wrote and produced a major feature-length documentary about Ella Fitzgerald called Ella: Just One of Those Things. Find out more at ReggieNadelson.com.