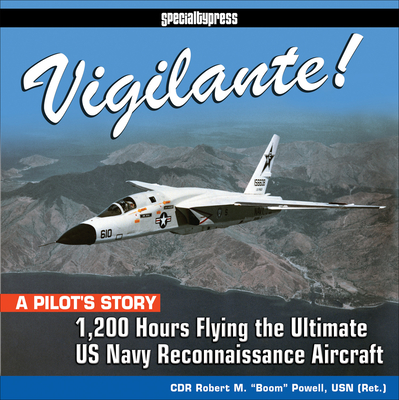 North American's RA-5C Vigilante represents the absolute zenith of Jet Age aerial reconnaissance at Mach 2. The aircraft's history corresponds to the evolution of the war in Vietnam, where Vigilantes located targets and assessed post-strike damage. The jet's two crewmen operated highly sophisticated sensors, cameras, infrared mapping, side-looking radar, and electronic countermeasure equipment. Because of their ultra-high-risk missions, Vigilantes suffered the highest loss rate of any US Navy aircraft, and the number of RA-5Cs built was small as was the cadre of dedicated men who flew them. This book explains the aircraft and its development in great detail and gives new insight into the courageous men who flew the Vigilante in combat.

Author Robert Boom Powell was a US Navy carrier pilot for 16 of his 20 years in the service. His second combat tour in Vietnam was spent flying the Vigilante, and he incorporates historical fact, detailed new information, and never-before-published photographs to produce the definitive work on this aircraft. Personal sidebar anecdotes are interspersed in the text, adding the vital human element to this compelling story of Naval Aviation at its best.

No book has ever been written about the A3J/RA-5C like this one, telling the story of North American's jet in such vivid detail. Many of the rare, never-before-published photographs were culled from the author's personal collection, archives of the National Museum of Naval Aviation in Pensacola, Florida, the Tailhook Association in San Diego, California, and several well-known photo historians. The author also contacted 40 veterans of the RA-5C community to acquire their Vigilante stories, which have also never been told.