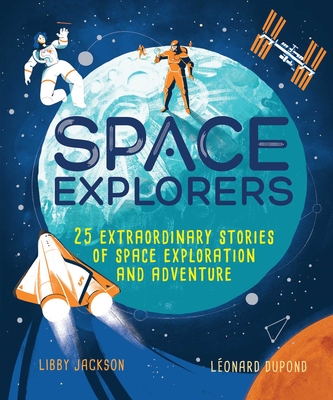 By  Libby Jackson , Illustrated By  Léonard Dupond
$ 21.99
Out of Stock In Store (Available to Order)

Launch Yourself into the Great Unknown.

The universe has always fascinated humans, but only a few have been daring enough to travel beyond the surface of the Earth. From the first man and woman in space to the moon landings to building the International Space Station in orbit, the history of space exploration is filled with peril, bravery, and strokes of genius.

In this beautifully illustrated anthology, spaceflight expert Libby Jackson reveals the best true stories of humankind’s thrilling journey to the stars and beyond.

Libby Jackson is one of Britain’s leading experts in human spaceflight, having spent over a decade working at the forefront of the field. Space was her childhood passion and after completing degrees in physics at Imperial College London and astronautics and space engineering at Cranfield University, she has worked in the space industry ever since. Libby is passionate about sharing stories of human spaceflight and encouraging young people to follow their passions in life. Libby is the author of Space Explorers and a frequent contributor on television and radio, including Stargazing Live, The Big Think: Should We Go To Mars?, and Astronauts: Do You Have What It Takes?.

Léonard Dupond graduated from Ecole de Condé Paris in 2015. He has since illustrated three books for La Martinière Jeunesse, designed eighteen book covers, and worked for various institutional and commercial clients. Léonard is represented by Agent 002 in France and Garance Illustration Agency in the United States. He currently lives and shares a workspace in Lille, France.