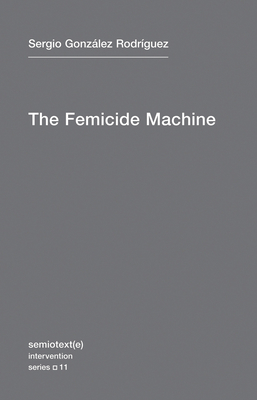 An account and analysis of the systematic murder of women and girls in the Mexican border town of Ciudad Ju rez.

In Ciudad Juarez, a territorial power normalized barbarism. This anomalous ecology mutated into a femicide machine: an apparatus that didn't just create the conditions for the murders of dozens of women and little girls, but developed the institutions that guarantee impunity for those crimes and even legalize them. A lawless city sponsored by a State in crisis. The facts speak for themselves.
--from The Femicide Machine

Best known to American readers for his cameo appearances as The Journalist in Roberto Bolano's 2666 and as a literary detective in Javier Mar as's novel Dark Back of Time, Sergio Gonz lez Rodr guez is one of Mexico's most important contemporary writers. He is the author of Bones in the Desert, the most definitive work on the murders of women and girls in Ju rez, Mexico, as well as The Headless Man, a sharp meditation on the recurrent uses of symbolic violence; Infectious, a novel; and Original Evil, a long essay. The Femicide Machine is the first book by Gonz lez Rodr guez to appear in English translation.

Written especially for Semiotext(e) Intervention series, The Femicide Machine synthesizes Gonz lez Rodr guez's documentation of the Ju rez crimes, his analysis of the unique urban conditions in which they take place, and a discussion of the terror techniques of narco-warfare that have spread to both sides of the border. The result is a gripping polemic. The Femicide Machine probes the anarchic confluence of global capital with corrupt national politics and displaced, transient labor, and introduces the work of one of Mexico's most eminent writers to American readers.