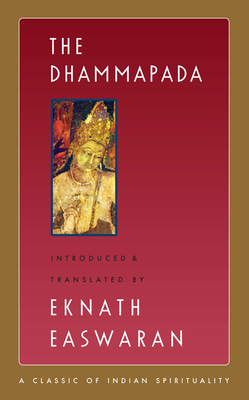 By  Eknath Easwaran
Paperback
$ 11.95
Out of Stock In Store (Available to Order)

Easwaran's best-selling translation of this classic Buddhist text The Dhammapada is reliable, readable, and profound.

Dhammapada means "the path of dharma," the path of harmony and righteousness that anyone can follow to reach the highest good. The Dhammapada is a collection of verses, gathered probably from direct disciples who wanted to preserve what they had heard from the Buddha himself.

Easwaran's comprehensive introduction to the Dhammapada gives an overview of the Buddha's teachings that is penetrating, and clear - accessible for readers new to Buddhism, but also with fresh insights and practical applications for readers familiar with this text. His translation is based on the original Pali. Chapter introductions, notes and a Sanskrit glossary place individual verses into the context of the broader Buddhist canon.

Easwaran is a master storyteller, and the introduction includes many stories that make moving, memorable reading, bringing young Siddhartha and his heroic spiritual quest vividly to life. This faithful interpretation brings us closer to the compassionate heart of the Buddha.

Eknath Easwaran (1910-1999) brings to this volume a rare combination of credentials. He was trained from an early age in Sanskrit, of which Pali, the language of the Buddha, is a simplified version. Later he studied English literature and was chairman of the English department at a major Indian university when he came to the United States on a Fulbright fellowship in 1959. Huston Smith writes, His Indian heritage, literary gifts, and spiritual sensibilities here produce a sublime rendering of the words of the Buddha. Verse after verse shimmers with quiet, confident authority.In 1961 Easwaran founded the Blue Mountain Center of Meditation in California, and in 1967, at the University of California, Berkeley, he taught the first academic course on meditation ever offered for credit at a major American university. He continued to teach passage meditation and his eight-point program for spiritual living to an American and international audience for almost forty years. His thirty-three books on meditation and the classics of world mysticism are translated into twenty-five languages.From the mid-1970s onwards, Easwaran held classes on the Dhammapada for a primarily American audience. A gifted teacher, he was able to anticipate the problems that Western readers may have with the concepts underlying the classics of Indian spirituality, and to explain them in fresh and profoundly simple ways. But for Easwaran the Dhammapada was not just of intellectual interest. His main qualification for interpreting the Dhammapada, he said, was that he knew from his own experience that these verses could truly transform our lives.