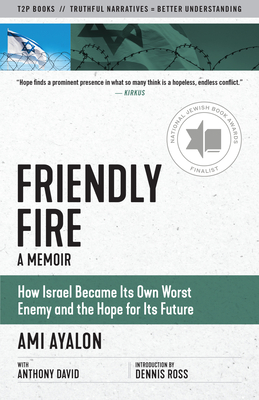 In this deeply personal journey of discovery, Ami Ayalon seeks input and perspective from Palestinians and Israelis whose experiences differ from his own. As head of the Shin Bet security agency, he gained empathy for the enemy and learned that when Israel carries out anti-terrorist operations in a political context of hopelessness, the Palestinian public will support violence, because they have nothing to lose. Researching and writing Friendly Fire, he came to understand that his patriotic life had blinded him to the self-defeating nature of policies that have undermined Israel's civil society while heaping humiliation upon its Palestinian neighbors. If Israel becomes an Orwellian dystopia, Ayalon writes, it won't be thanks to a handful of theologians dragging us into the dark past. The secular majority will lead us there motivated by fear and propelled by silence. Ayalon is a realist, not an idealist, and many who consider themselves Zionists will regard as radical his conclusions about what Israel must do to achieve relative peace and security and to sustain itself as a Jewish homeland and a liberal democracy.

Admiral (Ret.) Ami Ayalon is a former Flotilla 13 (Israel's navy SEALs) commando, commander of the navy, director of the Shin Bet security agency, cabinet minister, Knesset member and a recipient of the Medal of Valor, Israel's highest military decoration. With Sari Nusseibeh, he established the People's Voice peace initiative in 2002. He is a member of Commanders for Israel's Security, chairman of the Executive Committee of the Haifa Research Center for Maritime & Strategy and chairman of AKIM Israel (the National Association for children and adults with Intellectual Disabilities). He organized and was featured in the Academy Award-nominated documentary, The Gatekeepers. Anthony David, historian and biographer, teaches creative writing at the University of New England's campus in Tangier, Morocco.Dennis Ross, American diplomat and author, has served as the Director of Policy Planning in the State Department under President George H. W. Bush, the special Middle East coordinator under President Bill Clinton, a former special assistant to President Barack Obama and as a special adviser for to the former Secretary of State Hillary Clinton. He is The Washington Institute's William Davidson Distinguished Fellow.