Keynes: The Return of the Master 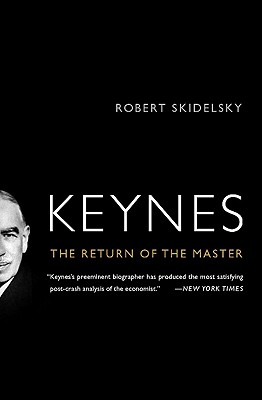 Keynes: The Return of the Master

By  Robert Skidelsky
Paperback
$ 16.99
Out of Stock In Store (Available to Order)

In the debris of the financial crash of 2008, the principles of John Maynard Keynes -- that economic storms are a normal part of the market system, that governments need to step in and use fiscal ammunition to prevent these storms from becoming depressions, and that societies that value the pursuit of money should reprioritize -- are more pertinent and applicable than ever. In Keynes: The Return of the Master, Robert Skidelsky brilliantly synthesizes Keynes career and life, and offers nervous capitalists a positive answer to the question we now face: When unbridled capitalism falters, is there an alternative?

Robert Skidelsky is the Emeritus Professor of Political Economy at the University of Warwick. His three volume biography of the economist John Maynard Keynes (1983, 1992, 2000) received numerous prizes, including the Lionel Gelber Prize for International Relations and the Council on Foreign Relations Arthur Ross Book Award. He is the author of The World After Communism. He was made a life peer in 1991, and was elected Fellow of the British Academy in 1994.