That Awful Mess on the Via Merulana 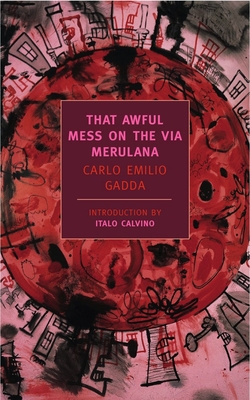 That Awful Mess on the Via Merulana

In a large apartment house in central Rome, two crimes are committed within a matter of days: a burglary, in which a good deal of money and precious jewels are taken, and a murder, as a young woman whose husband is out of town is found with her throat cut. Called in to investigate, melancholy Detective Ciccio, a secret admirer of the murdered woman and a friend of her husband’s, discovers that almost everyone in the apartment building is somehow involved in the case, and with each new development the mystery only deepens and broadens. Gadda’s sublimely different detective story presents a scathing picture of fascist Italy while tracking the elusiveness of the truth, the impossibility of proof, and the infinite complexity of the workings of fate, showing how they come into conflict with the demands of justice and love.

Italo Calvino, Pier Paolo Pasolini, and Alberto Moravia all considered That Awful Mess on the Via Merulana to be the great modern Italian novel. Unquestionably, it is a work of universal significance and protean genius: a rich social novel, a comic opera, an act of political resistance, a blazing feat of baroque wordplay, and a haunting story of life and death.

Carlo Emilio Gadda (1893—1973) was born in Milan, where he spent a “tormented childhood and even more miserable adolescence.” He earned a degree in engineering, volunteered to fight in World War I, and was taken prisoner by the Germans. After the war, Gadda began to write while working as an engineer in countries as far afield as Argentina. Among Gadda’s other books are a novel, Acquainted with Grief, and his War and Prison Journals.

Italo Calvino (1923—1985) was an Italian writer and novelist. His works include Numbers in the Dark, The Road to San Giovanni, Six Memos for the Next Millennium, The Baron in the Trees, If on a Winter's Night a Traveller, Invisible Cities, Marcovaldo, and Mr. Palomar.

William Weaver is celebrated for his numerous translations from the Italian, including Umberto Eco's The Name of the Rose and novels and stories by Italo Calvino. Weaver's translation of Pirandello's The Late Mattia Pascal is also published by NYRB Classics.