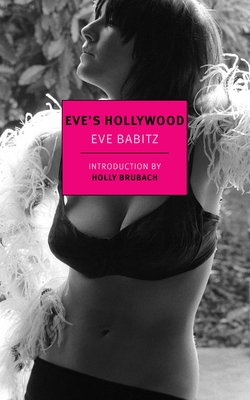 By  Eve Babitz , Introduction by  Holly Brubach
$ 18.95
Out of Stock In Store (Available to Order)

A legendary love letter to Los Angeles by the city's most charming daughter, complete with portraits of rock stars at Chateau Marmont, surfers in Santa Monica, prostitutes on sunset, and Eve's own beloved cat, Rosie.

Journalist, party girl, bookworm, artist, muse: by the time she’d hit thirty, Eve Babitz had played all of these roles. Immortalized as the nude beauty facing down Duchamp and as one of Ed Ruscha’s Five 1965 Girlfriends, Babitz’s first book showed her to be a razor-sharp writer with tales of her own. Eve’s Hollywood is an album of  vivid snapshots of Southern California’s haute bohemians, of outrageously beautiful high-school ingenues and enviably tattooed Chicanas, of rock stars sleeping it off at the Chateau Marmont. And though Babitz’s prose might appear careening, she’s in control as she takes us on a ride through an LA of perpetual delight, from a joint serving the perfect taquito, to the corner of La Brea and Sunset where we make eye contact with a roller-skating hooker, to the Watts Towers. This “daughter of the wasteland” is here to show us that her city is no wasteland at all but a glowing landscape of swaying fruit trees and blooming bougainvillea, buffeted by earthquakes and the Santa Ana winds—and every bit as seductive as she is.

Eve Babitz is the author of several books of fiction, including Sex and Rage: Advice to Young Ladies Eager for a Good Time; L.A. Woman; and Black Swans: Stories. Her nonfiction works include Fiorucci, The Book and Two by Two: Tango, Two-Step, and the L.A. Night. She has written for publications including Ms. and Esquire and in the late 1960s designed album covers for the Byrds, Buffalo Springfield, and Linda Ronstadt. Her novel Slow Days, Fast Company: The World, the Flesh, and L.A. (originally published in 1977) is forthcoming from NYRB Classics.


Holly Brubach is the author of Choura: The Memoirs of Alexandra Danilova; Girlfriend: Men, Women & Drag; and A Dedicated Follower of Fashion, a collection of essays. Formerly Style Editor of The New York Times Magazine, she has been a staff writer for The New Yorker and The Atlantic Monthly, as well as a frequent contributor to numerous magazines. She lives in Pittsburgh.