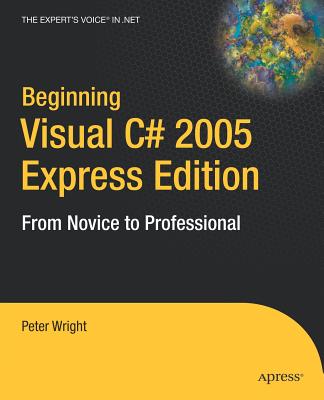 In the 1990s, Microsoft did the impossible and released a programming tool that let everyone write programs to run on Windows. Author Peter Wright was so excited about that tool, Visual Basic, that he wrote a series of books on it and introduced nearly a quarter of a million people all over the world to programming.

Now Microsoft has done it again with the release of the Express tools. With nearly every home now having a computer and most people having access to the Internet, being able to take control of the computer and write your own programs is more useful and exciting than ever. So Wright has decided to do it again.

In this book, you'll find everything you need to program your computer by using Visual C# 2005 Express, one of the very latest programming tools from Microsoft. If you have never written computer programs before, Wright will show you how much fun and how easy it can be. Perhaps you are a programmer and just need to get up to speed on .NET for work--this book is for you too.

Wright took the same approach with this book that he did with the VB titles, and inside you'll find a fast-paced guide to the essentials to get you programming fast. You'll learn the C# language and the tools Visual C# 2005 Express provides. He covers everything from simple console programs to code that talks to the Internet, and even how to write your own database programs. Whatever your reasons for wanting to learn to program with C#, this book will get you where you want to be quickly, and hopefully with a smile on your face. So dive in and change the way you use computers forever.

Peter Wright has been programming with, and writing about, Microsoft development tools since 1992. He is the author of about a dozen books, including the international best selling series, Beginning Visual Basic, and has written numerous articles for the both the print and online press worldwide. Born in England, Peter now lives in Florida along with his wife, 2 kids, and 2 fluffy attack spaniels called Mac and Tosh.