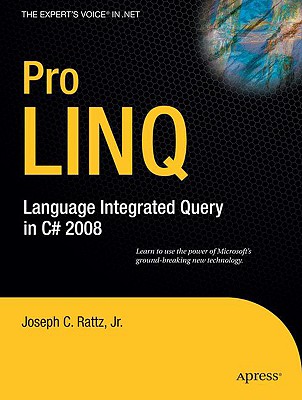 By  Joseph Rattz
Paperback
$ 44.99
Out of Stock In Store (Available to Order)

LINQ is the project name for a set of extensions to the .NET Framework that provide a generic approach to querying data from different data sources. LINQ will premier in Visual Studio 2008, and will become the next must-have skill for .NET developers. For more information about LINQ, you can check out the author's portal at www.LINQdev.com.

Pro LINQ: Language Integrated Query in C# 2008 is all about code.

Literally, this book starts with code and ends with code. In most books, the author shows the simplest example demonstrating how to use a method, but they so rarely show how to use the more complex prototypes. Pro LINQ: Language Integrated Query in C# 2008 is different. Demonstrating the overwhelming majority of LINQ operators and protoypes, it is a veritable treasury of LINQ examples.

Rather than obscure the relevant LINQ principles in code examples by focusing on a demonstration application you have no interest in writing, Pro LINQ: Language Integrated Query in C# 2008 cuts right to the chase of each LINQ operator, method, or class. However, where complexity is necessary to truly demonstrate an issue, the examples are right there in the thick of it. For example, code samples demonstrating how to handle concurrency conflicts actually create concurrency conflicts so you can step through the code and see them unfold.

Most books tell you about the simple stuff, while few books warn you of the pitfalls. Where Pro LINQ: Language Integrated Query in C# 2008 returns your investment is in the hours, and sometimes days, spent by the author determining why something may not work as expected. Sometimes this results in an innocent looking paragraph that may take you a minute to read and understand, but took days to research and explain.

Face it, most technical books while informative, are dull. LINQ need not be dull. Written with a sense of humor, Pro LINQ: Language Integrated Query in C# 2008 will attempt to entertain you on your journey through the wonderland of LINQ and C# 2008.

Joseph C. Rattz, Jr., unknowingly began his career in software development in 1990 when a friend asked him for assistance writing an ANSI text editor named ANSI Master for the Commodore Amiga. A hangman game (the Gallows) soon followed. From these compiled BASIC programs, he moved on to programming in C for more speed and power. Joe then developed applications that were sold to JumpDisk, an Amiga disk magazine, as well as Amiga World magazine. Due to developing in a small town on a fairly isolated platform, Joe learned all the wrong ways to write code. It was while trying to upgrade his poorly written applications that he gained respect for the importance of easily maintainable code. It was love at first sight when Joe spotted a source-level debugger in use for the first time. Two years later, Joe obtained his first software development opportunity at Policy Management Systems Corporation as an entry level programmer developing a client/server insurance application for OS/2 and Presentation Manager. Through the years, he added C++, Unix, Java, ASP, ASP.NET, C#, HTML, DHTML, and XML to his skill set, while developing applications for SCT, DocuCorp, IBM, and the Atlanta Committee for the Olympic Games, CheckFree, NCR, EDS, Delta Technology, Radiant Systems, and the Genuine Parts Company. Joe enjoys the creative aspects of user interface design, and he appreciates the discipline necessary for server-side development. But, given his druthers, his favorite development pastime is debugging code. Joe can be found working for the Genuine Parts Company the parent company of NAPA in the Automotive Parts Group Information Systems department, where he works on his baby, the storefront web site. This site for NAPA provides the stores a view into their accounts and data on a network of AS/400s.