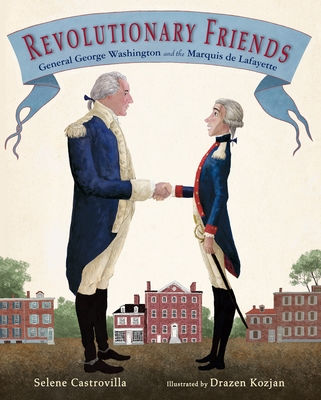 By  Selene Castrovilla , Illustrated By  Drazen Kozjan
$ 16.99
Out of Stock In Store

Young fans of the smash Broadway hit "Hamilton" will enjoy this narrative nonfiction picture book story about the important friendship between George Washington and the Marquis de Lafayette during the Revolutionary War.

Lafayette has come to America to offer his services to the patriotic cause. Inexperienced but dedicated, he is a much-needed ally and not only earns a military position with the Continental Army but also Washington's respect and admiration. This picture book presents the human side of history, revealing the bond between two famous Revolutionary figures. Both the author and illustrator worked with experts and primary sources to represent both patriots and the war accurately and fairly.

Selene Castrovilla has written about the American Revolution before in By the Sword and Upon Secrecy, both published by Calkins Creek. By the Sword was named an IRA Notable Book and a Moonbeam Children's Book Award Gold Medalist for Nonfiction. Upon Secrecy was named a Bank Street College of Education Best Children's Book of the Year. Ms. Castrovilla lives on Long Island with her two sons. You can read more about her at selenecastrovilla.com.

Drazen Kozjan traveled to the site of the Battle of Brandywine and Philadelphia to research Revolutionary Friends. He is an illustrator and animator who helped to develop, design, and storyboard numerous successful cartoons including The Neverending Story, Rupert the Bear, Franklin the Turtle, and George Shrinks, among many others. He is also the illustrator of Diary of A Fairy Godmother by Esme Raji Codell and the Julia Gillian series by Alison McGhee. He lives in Toronto, Ontario. Visit him at drazenkozjan.com.