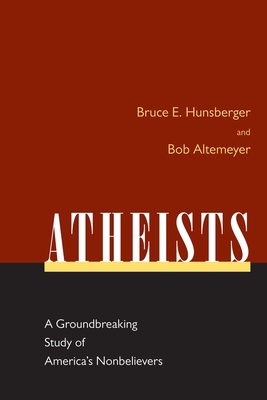 By  Bruce E. Hunsberger , Bob Altemeyer
$ 20.99
Out of Stock In Store (Available to Order)

According to polls, most Americans believe in God. But disbelief is spreading. After reviewing the mounting evidence that organized religion is declining in many countries, this accessible book provides the first scientific study of active atheists. The authors surveyed nearly 300 members of atheist organizations in the United States. Besides soliciting these nonbelievers’ level of education, political leanings, etc., the researchers sought to understand how each respondent had become an atheist. Had they ever believed in God, or had they never? Had they paid a price for their atheism?

Three chapters describe the levels of dogmatism, zealotry, and religious prejudice found among the active atheists. These results, compared with others obtained from more ordinary samples of atheists (and strong fundamentalists), often surprised the authors. Uniquely, the book features a chapter in which the atheists give their reaction to the study and its often-surprising findings. Another chapter breaks down the answers a large Canadian sample gave to the measures used in the American study, according to how religious the respondent was—from atheist to agnostic to four different levels of theistic intensity. A clear finding emerged: the more religious a group was, the more their personalities, prejudices, and beliefs separated them from everyone else.

Bruce E. Hunsberger (1946-2003) was professor of psychology at Wilfred Laurier University and the winner of the William James Award from the American Psychological Association for outstanding research in religion.

Bob Altemeyer (Winnipeg, Canada) is associate professor of psychology at the University of Manitoba and the recipient of the Prize in Behavioral Science Research from the American Association for the Advancement of Science.

Altemeyer and Hunsberger are the coauthors of Amazing Conversions: Why Some Turn to Faith and Others Abandon Religion.