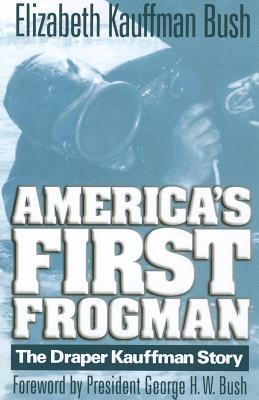 By  Elizabeth Kauffman Bush
$ 24.95
Out of Stock In Store (Click to Order)

Although bad eyesight kept him from receiving a commission in the U.S. Navy when he graduated from the Naval Academy in 1933, Draper Kauffman became a hero of underwater demolition in World War II and went on to a distinguished naval career. Today Admiral Kauffman is remembered as the nation's first frogman and the father of the Navy Seals. His spectacular wartime service disarming enemy bombs, establishing bomb disposal schools, and organizing and leading the Navy's first demolition units is the focus of this biography written by Kauffman's sister. Elizabeth Kauffman Bush, who also is the aunt of President George W. Bush, draws on family papers as well as Navy documents to tell Kauffman's story for the first time. Determined to defend the cause of freedom long before the U.S. ever entered the war, Kauffman was taken prisoner by the Germans as an ambulance driver in France, and after his release joined the Royal Navy to defuse delayed-action bombs during the London blitz. After Pearl Harbor his eyes were deemed adequate and he was given a commission in the U.S. Naval Reserve. With his experience, he was asked to establish an underwater demolition school in Fort Pierce, Florida, where he personally trained men to defuse bombs and neutralize other submerged dangers. His men were sent to demolish the obstacles installed by the Nazis at Normandy, and Kauffman himself led underwater demolition teams in the Pacific at Saipan, Tinian, and Guam and later directed UDT operations at Iwo Jima and Okinawa. His men remember him as an exceptional leader who led by example. He trained and fought alongside them, impervious to danger. Because of the high standards he set for those who became frogmen, thousands of American lives were saved in World War II, Korea, and Vietnam. Draper Kauffman's early established UDT traditions of perseverance, teamwork, and a lasting brotherhood of men of extraordinary courage is carried on by Navy Seals. This is his legacy to the U.S. Navy and his country.