The Smartest Guys in the Room: The Amazing Rise and Scandalous Fall of Enron 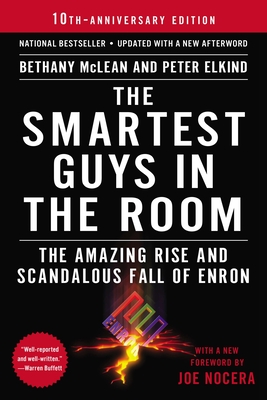 The Smartest Guys in the Room: The Amazing Rise and Scandalous Fall of Enron

By  Bethany McLean , Peter Elkind , Foreword by  Joe Nocera
$ 21.00
Out of Stock In Store (Available to Order)

The tenth-anniversary edition of the definitive account of the Enron scandal, updated with a new chapter

The Enron scandal brought down one of the most admired companies of the 1990s. Countless books and articles were written about it, but only The Smartest Guys in the Room holds up a decade later as the definitive narrative. For this tenth anniversary edition, McLean and Elkind have revisited the fall of Enron and its aftermath, in a new chapter that asks why Enron still matters. They also reveal the fates of the key players in the scandal.

Bethany McLean and Peter Elkind collaborated on this book when they both were Fortune senior writers. McLean, a former investment banking analyst for Goldman Sachs, is now a contributing editor to Vanity Fair and lives in Chicago. Elkind, an award-winning investigative reporter, is now an editor-at-large for Fortune and lives in Fort Worth, Texas.