The Tao of Willie: A Guide to the Happiness in Your Heart 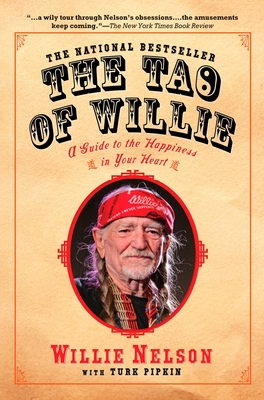 The Tao of Willie: A Guide to the Happiness in Your Heart

Born in small-town Texas during the Great Depression, Willie Nelson was raised to believe in helping his neighbors and living without pretense. After many hardscrabble years as a poorly paid songwriter (often watching his work become a gold mine for other performers), Willie finally found his own voice—the gentle but unmistakably honest sound that has made him an American icon. Now the master of harmonization has created a guide to finding harmony in everyday life. Featuring vignettes from each chapter of his seventy-plus years (along with plenty of his favorite jokes), The Tao of Willie captures his views on money, love, war, religion, cowboys, and other essential Willie topics.

Loosely based on the principles of the Chinese philosophy of the Tao Te Cheng, which Willie has admired and followed for much of his adult life, this inspiring and entertaining collection of "Willie wisdom" takes us from his roadhouse days, when he united redneck rockers with straitlaced country music fans, to the mega-sized benefit concerts and environmentalism that define his boundless heart. In the spirit of his fellow Texan Harvey Penick's Little Red Book, Willie's timeless insights sparkle with clarity: It's like having a one-on-one conversation with the sage himself.

A longtime friend and golfing buddy of Willie’s, writer, director and actor Turk Pipkin has appeared in numerous feature films and played a recurring character on The Sopranos. A contributing editor to Texas Monthly, he has also written for television and is the author of eight previous books.