Never Turn Your Back on an Angus Cow: My Life as a Country Vet 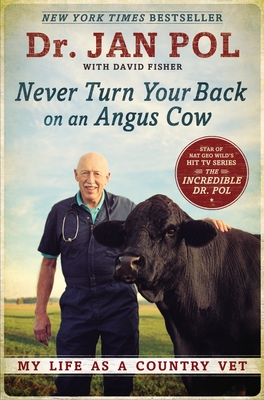 Never Turn Your Back on an Angus Cow: My Life as a Country Vet

The star of The Incredible Dr. Pol shares his amusing, and often poignant, tales from his four decades as a vet in rural Michigan.

Dr. Jan Pol is not your typical veterinarian. Born and raised the Netherlands on a dairy farm, he is the star of Nat Geo Wild’s hit show The Incredible Dr. Pol and has been treating animals in rural Michigan since the 1970s. Dr. Pol’s more than 20,000 patients have ranged from white mice to 2600-pound horses and everything in between.

From the time he was twelve years old and helped deliver a litter of piglets on his family’s farm to the incredible moments captured on his hit TV show, Dr. Pol has amassed a wealth of stories of what it’s like caring for this menagerie of animals. He shares his own story of growing up surrounded by animals, training to be a vet in the Netherlands, and moving to Michigan to open his first practice in a pre fab house. He has established himself as an empathetic yet no-nonsense vet who isn’t afraid to make the difficult decisions in order to do what’s best for his patients—and their hard-working owners. A sick pet can bring heartache, but a sick cow or horse could threaten the very livelihood of a farmer whose modest profits are dependent on healthy livestock.

Reminiscent of the classic books of James Herriot, Never Turn Your Back on an Angus Cow is a charming, fascinating, and funny memoir that will delight animal lovers everywhere.

A native of The Netherlands, Dr. Jan Pol has been a practicing vet for more than 35 years. He lives in Weidman, Michigan with his wife, two horses, two dogs, five cats, five peacocks, two doves, about 25 chickens, and who knows how many fish.