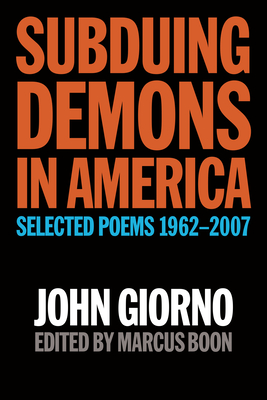 Associated with key 1960s avant garde figures such as Ginsberg, Burroughs, Rauschenberg, and Johns, John Giorno was an early pioneer of multimedia poetry through Giorno Poetry Systems, which also distributed a who's who of the American underground from Patti Smith to Sonic Youth. Giorno's use of transgressive material and in-your-face, amplified delivery was also a key influence on punk/new wave pioneers such as Suicide, Throbbing Gristle, and Black Flag. Not just a poet but a sexual, spiritual, and political radical, Giorno helped pioneer the open celebration of queer sexuality in poetry in the 1960s. Subduing Demons in America offers the best of Giorno's revolutionary poetry, from his striking Pop Art-influenced poems of the 1960s to the psychedelic, echo-laden, multitracked cut-ups of the 1970s with their explosive configurations of queer sex, spiritual practice, and the bohemian Good Life. Also here are the pared-down punk/hip-hop performance poems that Giorno performed in the 1980s.

John Giorno was an American poet and visual artist. From his studio on the Bowery, where he lived and worked for over fifty years, Giorno's practice grew beyond poetry to encompass film, painting, sound installation and much more. An early pioneer of recorded spoken word projects, he founded the nonprofit Giorno Poetry Systems in 1965, which produced albums with hundreds of artists and poets. Giorno is best known for his interactive telephone work "Dial-A-Poem," first presented in 1968, which invited people to call into a dedicated line to hear poems from live recordings by Laurie Anderson, John Ashbery, Frank O'Hara, and numerous others. He died in 2019.