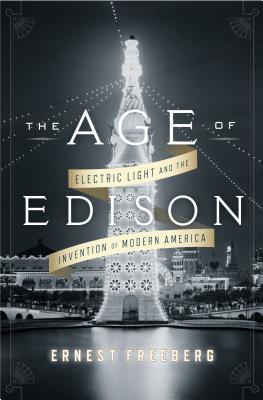 The late nineteenth century was a period of explosive technological creativity, but arguably the most important invention of all was Thomas Edison's incandescent lightbulb. Unveiled in his Menlo Park, New Jersey, laboratory in 1879, the lightbulb overwhelmed the American public with the sense of the birth of a new age. More than any other invention, the electric light marked the arrival of modernity.
The lightbulb became a catalyst for the nation's transformation from a rural to an urban-dominated culture. City streetlights defined zones between rich and poor, and the electrical grid sharpened the line between town and country. Bright lights meant big city. Like moths to a flame, millions of Americans migrated to urban centers in these decades, leaving behind the shadow of candle and kerosene lamp in favor of the exciting brilliance of the urban streetscape.
"The Age of Edison "places the story of Edison's invention in the context of a technological revolution that transformed America and Europe in these decades. Edison and his fellow inventors emerged from a culture shaped by broad public education, a lively popular press that took an interest in science and technology, and an American patent system that encouraged innovation and democratized the benefits of invention. And in the end, as Freeberg shows, Edison's greatest invention was not any single technology, but rather his reinvention of the process itself. At Menlo Park he gathered the combination of capital, scientific training, and engineering skill that would evolve into the modern research and development laboratory. His revolutionary electrical grid not only broke the stronghold of gas companies, but also ushered in an era when strong, clear light could become accessible to everyone.
In "The Age of Edison," Freeberg weaves a narrative that reaches from Coney Island and Broadway to the tiniest towns of rural America, tracing the progress of electric light through the reactions of everyone who saw it. It is a quintessentially American story of ingenuity, ambition, and possibility, in which the greater forces of progress and change are made visible by one of our most humble and ubiquitous objects.

Ernest Freeberg is a distinguished professor of humanities in the history department at the University of Tennessee. He is the author of "The Education of Laura Bridgman" and "Democracy s Prisoner," which was a "Los Angeles Times "Book Prize finalist and winner of the David J. Langum, Sr. Prize in American Legal History and the Eli M. Oboler Award from the American Library Association s Intellectual Freedom Roundtable. Freeberg is a distinguished lecturer for the Organization of American Historians and has produced a number of public radio documentaries on historical themes."