Making It: Why Manufacturing Still Matters 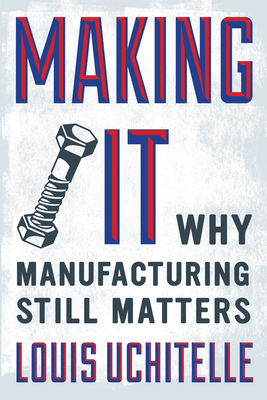 Making It: Why Manufacturing Still Matters

By  Louis Uchitelle
Hardcover
$ 24.95
Out of Stock In Store (Available to Order)

From the longtime New York Times economics correspondent, a closely reported argument for the continuing importance of industry for American prosperity

In the 1950s manufacturing generated nearly 30 percent of U.S. income. Over the past fifty-five years, that share has gradually declined to less than 12 percent, at the same time that real estate, finance, and Wall Street trading have grown. While manufacturing's share of the U.S. economy shrinks, it expands in countries such as China and Germany that have a strong industrial policy. Meanwhile Americans are only vaguely aware of the many consequences--including a decline in their self-image as inventive, practical, and effective people--of the loss of that industrial base.

Reporting from places where things were and sometimes still are "Made in the USA"--Albany and New York, New York; Boston; Detroit; Fort Wayne and Indianapolis, Indiana; Los Angeles; Midland, Michigan; Milwaukee; Philadelphia; St. Louis; and Washington, DC--longtime New York Times economics correspondent Louis Uchitelle argues that the government has a crucial role to play in making domestic manufacturing possible. If the Department of Defense subsidizes the manufacture of weapons and war mat riel, why shouldn't the government support the industrial base that powers our economy?

Combining brilliant reportage with an incisive economic and political argument, Making It tells the overlooked story of manufacturing's still-vital role in the United States and how it might expand.

Louis Uchitelle covered economics and labor issues for the New York Times for twenty-five years. Before that, as a foreign correspondent for Associated Press, he covered the American occupation of the Dominican Republic in the 1960s and the rise of a guerrilla movement in Argentina. He is the author of The Disposable American and lives in Scarsdale, New York.