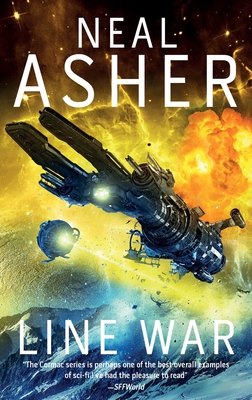 If you want se, violence, and excellent alients., this is your book.—SFX

Under attack from every direction, the Polity teeters on the brink of annihilation . . . and only Agent Cormac can save it.

When one of Erebus’s wormships kills millions on the world of Klurhammon for no tactical reason and the AI entity controlling the lethal Jain technology attacks the Polity, it falls to Agent Cormac to figure out why.

But, as further attacks ensue, it brings some of the most dangerous individuals in the Polity to the front lines of the war, including Mr. Crane, the indefatigable brass killing machine, and Orlandine, a vastly augmented haiman who herself controls Jain technology as she seeks both allies and a weapon of appalling power.

Meanwhile, with death and destruction on the horizon, scientist Mika is kidnapped and forced to wake the makers of the Jain technology from their five-million-year slumber.

But are Erebus’s attacks not erratic and instead completely planned out? And could that spell the end of the Polity?

Only Agent Cormac stands in the way . . .

Neal Asher is a science fiction writer whose work has been nominated for both the Philip K. Dick and the British Fantasy Society awards. He has published more than twenty books, many set within his “Polity” universe, including Gridlinked, The Skinner, and Dark Intelligence. He divides his time between Essex and a home in Crete.