The Banality of Suicide Terrorism: The Naked Truth About the Psychology of Islamic Suicide Bombing 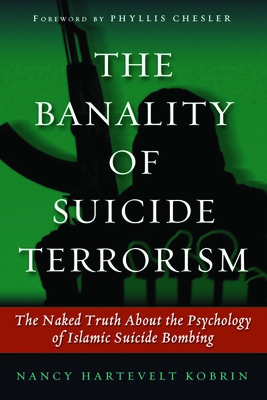 The Banality of Suicide Terrorism: The Naked Truth About the Psychology of Islamic Suicide Bombing

By  Nancy Hartevelt Kobrin
$ 24.95
Out of Stock In Store (Available to Order)

Terrorist organizations have been able to market mass murder under hysteria’s banner of alleged martyrdom. But when it comes to understanding Islamic suicide terrorism in particular, there is much more to it than martyrdom. In this groundbreaking book, Nancy Kobrin dismantles the psychological dynamics of suicide terrorism to help the reader gain a new perspective on one of the most destructive forces the world has witnessed to date. Until now, no one has explained why the mother-child relationship is central to understanding Islamic suicide terrorism. The Banality of Suicide Terrorism exposes the very ordinariness of one of the deepest yet most poorly understood causes of the suicide bomber’s motivation: a profound terror of abandonment that is rooted in the mother-child relationship. According to Kobrin, this terror is so great in the would-be suicide terrorist that he or she must commit suicide (and mass murder in the process) in order to fend off that terror of dependency and abandonment. Suicide terrorists seek a return to the bond with the mother of early childhood— known as maternal fusion—by means of a “death fusion” with their enemies, who subconsciously represent the loved (and hated) maternal figure. The terrorist’s political struggle merely serves as cover for this emotionally terrifying inner turmoil, which can lead down the path of ultimate destruction.

Nancy Hartevelt Kobrin is a psychoanalyst who runs a counterterrorism consulting company that conducts seminars to help domestic and international law enforcement agencies. An expert on post-traumatic stress disorder (PTSD), Dr. Kobrin contributed to the section on short-term psychodynamic therapy in what has become the bible for the Veterans Administration system: Effective Treatments for PTSD, First Edition (Guilford Press, 2000). She has presented at the North Atlantic Treaty Organization; given seminars to the police and military intelligence agencies in Israel, Spain, and Sri Lanka; and taught U.S. Army military intelligence courses in Missouri and Florida. She lives in Minnesota.