Finding Dora Maar: An Artist, an Address Book, a Life 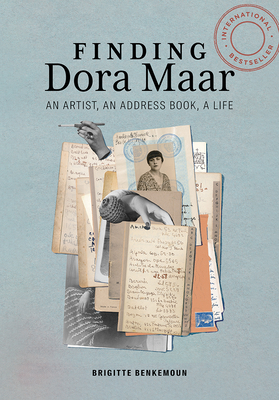 Finding Dora Maar: An Artist, an Address Book, a Life

By  Brigitte Benkemoun , Translated by  Jody Gladding
$ 24.95
Out of Stock In Store (Click to Order)

“[A] spirited and deeply researched project…. [Benkemoun’s] affection for her subject is infectious. This book gives a satisfying treatment to a woman who has been conﬁned for decades to a Cubist’s limited interpretation.” — Joumana Khatib, The New York Times

Merging biography, memoir, and cultural history, this compelling book, a bestseller in France, traces the life of Dora Maar through a serendipitous encounter with the artist’s address book.

In search of a replacement for his lost Hermès agenda, Brigitte Benkemoun’s husband buys a vintage diary on eBay. When it arrives, she opens it and finds inside private notes dating back to 1951—twenty pages of phone numbers and addresses for Balthus, Brassaï, André Breton, Jean Cocteau, Paul Éluard, Leonor Fini, Jacqueline Lamba, and other artistic luminaries of the European avant-garde.

After realizing that the address book belonged to Dora Maar—Picasso’s famous “Weeping Woman” and a brilliant artist in her own right—Benkemoun embarks on a two-year voyage of discovery to learn more about this provocative, passionate, and enigmatic woman, and the role that each of these figures played in her life.

Longlisted for the prestigious literary award Prix Renaudot, Finding Dora Maar is a fascinating and breathtaking portrait of the artist.

This work received support from the French Ministry of Foreign Affairs and the Cultural Services of the French Embassy in the United States through their publishing assistance program.

Brigitte Benkemoun is a journalist and writer. She is the author of La petite fille sur la photo (2012) and Albert le Magnifique (2016).

Jody Gladding is a poet and translator. She has translated some thirty books from French, including, most recently, Roland Barthes’s Album: Unpublished Correspondence and Texts (2018), Michel Pastoureau’s Yellow: The History of a Color (2019), and Jean Giono’s Occupation Journal (2020).