How to Read Nancy: The Elements of Comics in Three Easy Panels 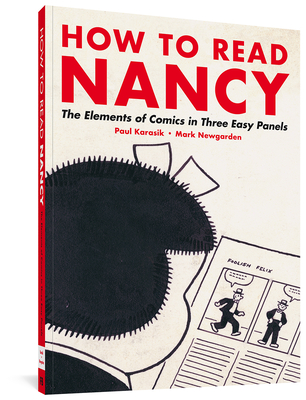 How to Read Nancy: The Elements of Comics in Three Easy Panels

By  Paul Karasik , Mark Newgarden , Foreword by  Jerry Lewis , Introduction by  James Elkins
$ 29.99
Out of Stock In Store (Available to Order)

The authors use a single three-panel Nancy strip to explain how the medium of comics works.

Everything that you need to know about reading, making, and understanding comics can be found in a single Nancy strip by Ernie Bushmiller from August 8, 1959. Paul Karasik and Mark Newgarden’s groundbreaking work How to Read Nancy ingeniously isolates the separate building blocks of the language of comics through the deconstruction of a single strip. No other book on comics has taken such a simple yet methodical approach to laying bare how the comics medium really works. No other book of any kind has taken a single work by any artist and minutely (and entertainingly) pulled it apart like this. How to Read Nancy is a completely new approach towards deep-reading art. In addition, How to Read Nancy is a thoroughly researched history of how comics are made, from their creation at the drawing board to their ultimate destination at the bookstore. Textbook, art book, monogram, dissection, How to Read Nancy is a game changer in understanding how the “simplest” drawings grab us and never leave. Perfect for students, academics, scholars, and casual fans.

Paul Karasik is the co-author (along with David Mazzucchelli) of the perennial graphic novel classic City of Glass, adapted from Paul Auster’s novel. He lives in Martha’s Vineyard.

Mark Newgarden is an acclaimed cartoonist and creator of the book We All Die Alone, the co-author (with Paul Karasik) of How to Read Nancy, and the co-author (along with his partner, Megan Montague Cash) of Houghton Mifflin’s bestselling Bow Wow series of children’s books. He lives in Williamsburg, Brooklyn.

Jerry Lewis was an American actor, comedian, singer, film producer, film director, screenwriter, and humanitarian. He was known for his slapstick humor in film, television, stage and radio.