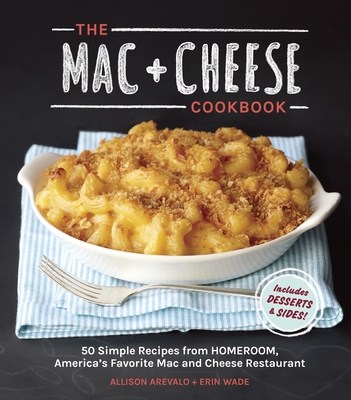 Macaroni and cheese is one of America’s favorite comfort foods, beloved by kids and adults alike. But there’s no need to rely on prefab mixes—all you need is a handful of kitchen staples, some tasty cheese, and a little insider advice courtesy of Homeroom restaurant. This perennially popular Oakland, California, eatery—with its entire menu devoted to mac and cheese—now shares its secrets for the best-ever mac recipes that will help you think outside the box!

These inventive dishes offer something for everyone: nostalgic homestyle recipes like Tuna Mac, international varieties like Sriracha Mac, decadent delights like Truffle Mac, and even the logic-defying Vegan Mac. You’ll also find recipes for quick veggie sides like Brussels Sprouts with Bacon and old-school desserts like frozen Peanut Butter Pie. With a basics section on perfecting mac sauce, choosing the best noodles, and customizing add-ins and toppings, plus an emphasis on quality ingredients and simple techniques, this fun, playful cookbook shows cheese-loving readers how to take this comfort-food staple to creative new heights.

ALLISON AREVALO was born into a food-loving Italian family in New York, where she helped her great-grandmother cook Sunday family dinners and learned the basics of cooking. Allison pursued a career in marketing before deciding to follow her true passion in life: food. In 2008, Allison and her husband quit their jobs and moved to Oakland, CA, in hopes of opening a restaurant. Their dream came true in 2010, the year she and Erin opened the doors to Homeroom.

ERIN WADE is a chef-turned-attorney-turned-chef-again. Erin’s love for cooking was sparked by her father’s homemade mac and cheese and her mother’s vast cookbook collection. Erin worked as a line cook and in pastry at restaurants in New York before attending law school at Berkeley. After practicing law for a year, Erin came to her senses and decided to return to her love of cooking by opening Homeroom with Allison. She lives in Oakland with her husband, Uri, and her daughter, Ellie—her favorite cooking partners.