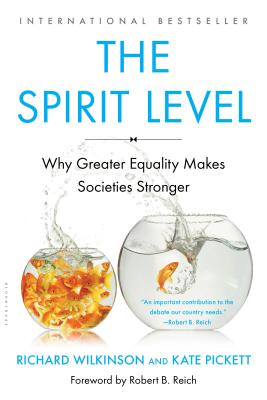 Groundbreaking analysis showing that greater economic equality-not greater wealth-is the mark of the most successful societies, and offering new ways to achieve it.

"Get your hands on this book."-Bill Moyers

This groundbreaking book, based on thirty years' research, demonstrates that more unequal societies are bad for almost everyone within them-the well-off and the poor. The remarkable data the book lays out and the measures it uses are like a spirit level which we can hold up to compare different societies. The differences revealed, even between rich market democracies, are striking. Almost every modern social and environmental problem-ill health, lack of community life, violence, drugs, obesity, mental illness, long working hours, big prison populations-is more likely to occur in a less equal society. The book goes to the heart of the apparent contrast between material success and social failure in many modern national societies.

The Spirit Level does not simply provide a diagnosis of our ills, but provides invaluable instruction in shifting the balance from self-interested consumerism to a friendlier, more collaborative society. It shows a way out of the social and environmental problems which beset us, and opens up a major new approach to improving the real quality of life, not just for the poor but for everyone. It is, in its conclusion, an optimistic book, which should revitalize politics and provide a new way of thinking about how we organize human communities.

Richard Wilkinson has played a formative role in international research in inequalities in health and his work has been published in 10 languages. He studied economic history at the London School of Economics before training in epidemiology and is Professor Emeritus at the University of Nottingham Medical School and Honorary Professor at University College London.

Kate Pickett is a Professor of Epidemiology at the University of York and a former National Institute for Health Research Career Scientist. She is the co-founder of The Equality Trust. She studied physical anthropology at Cambridge, nutritional sciences at Cornell and epidemiology at Berkeley before spending four years as an Assistant Professor at the University of Chicago.