Occupying Wall Street: The Inside Story of an Action That Changed America 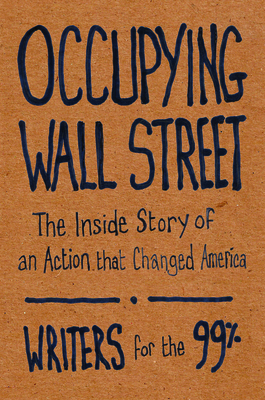 Occupying Wall Street: The Inside Story of an Action That Changed America

An essential and galvanizing on-the-ground account of how oxygen suddenly and miraculously flooded back into the American brain.--Jonathan Lethem

Occupying Wall Street] runs through OWS' beginnings and provides a fascinating look at how Zucotti Park functioned, the disagreements and difficulties in running the community, and contains first-hand accounts of some of its most dramatic moments. Part souvenir, part how-to guide, this is a remarkable and unique book.--The Huffington Post

For two months this fall, Zuccotti Park was the site of an extraordinary political action. Home to the hundreds of anti-capitalist protestors, the park became a communion of sharing and consensus in the heart of a citadel defined by greed and oligarchy.

In the early hours of Tuesday, November 15, the occupiers' camp was destroyed when police swept suddenly into the square. But if the occupation at Zuccotti was destroyed that night, the movement it spawned across America has only just begun.

Occupying Wall Street draws on extensive interviews with those who took part in the action to bring an inside-the-square history to life. In a vivid narrative, the key events of the occupation are described, and woven throughout are stories of daily life in the square focusing on how the kitchen, library, media center, clean-up, hospital, and General Assembly functioned, all in the words of the people who were there.

Writers for the 99% is a group of writers and researchers active in supporting Occupy Wall Street who came together to create this book.

Writers for the 99% is a group of writers and researchers, active in supporting Occupy Wall Street, who came together to create this book. A list of all those contributing will appear at the back of the book.