The Practicing Mind: Developing Focus and Discipline in Your Life -- Master Any Skill or Challenge by Learning to Love the Process 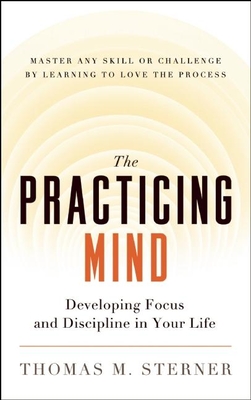 The Practicing Mind: Developing Focus and Discipline in Your Life -- Master Any Skill or Challenge by Learning to Love the Process

In those times when we want to acquire a new skill or face a formidable challenge we hope to overcome, what we need most are patience, focus, and discipline, traits that seem elusive or difficult to maintain. In this enticing and practical book, Thomas Sterner demonstrates how to learn skills for any aspect of life, from golfing to business to parenting, by learning to love the process.

Early life is all about trial-and-error practice. If we had given up in the face of failure, repetition, and difficulty, we would never have learned to walk or tie our shoes. So why, as adults, do we often give up on a goal when at first we don't succeed? In his study of how we learn (prompted by his pursuit of disciplines such as music and golf), Sterner has found that we have forgotten the principles of practice -- the process of picking a goal and applying steady effort to reach it. The methods Sterner teaches show that practice done properly isn't drudgery on the way to mastery but a fulfilling process in and of itself, one that builds discipline and clarity.

Thomas M. Sterner has studied Eastern and Western philosophy and modern sports psychology and trained as a jazz pianist. For more than twenty-five years, he served as the chief concert piano technician for a major performing arts center while operating a piano remanufacturing facility. He has also worked in the sound and video arts fields as a recording engineer, audio and video editor and processor, and composer. He is an accomplished musician, private pilot, student of archery, and avid golfer. He lives in Wilmington, Delaware.