Voices from the Center of the World: Contemporary Poets of Ecuador 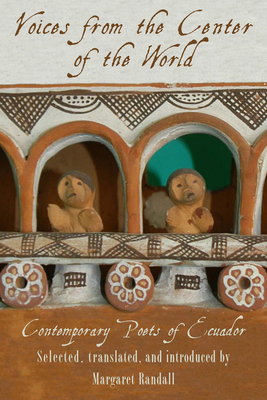 Voices from the Center of the World: Contemporary Poets of Ecuador

Editor  Margaret Randall, PhD
$ 17.95
Out of Stock In Store (Available to Order)

In VOICES FROM THE CENTER OF THE WORLD, Randall has gathered 25 poets born in Ecuador between 1926 and 1993. These include some cultural heroes of the 20th century, and many of the voices that define Peruvian political dissent. It also focuses on a new generations of poets, especially women and indigenous poets born after 1950. Especially exciting are poets writing in the Kichwa language, Ariruma Kowii (1961) and Lucila Lema (1974) who serve as custodians of indigenous knowledge and imaginations, at once political, historical, and ancestral. Margaret Randall’s selection and translations are alert to the edges and cadences of an individual idiom, to the plural alignments with the long view of history, and to consciousness of the country’s literary dynamism. Often overshadowed by the literatures of Colombia, Argentina and Chile, VOICES FROM THE CENTER OF THE WORLD brings the literature of Peru -- fully engaged in contemporary issues like human rights and climate change, yet infused with a wisdom drawn from its ancient mountain cultures.

Margaret Randall, the EDITOR AND TRANSLATOR of this volume, is a feminist poet, writer, photographer and social activist. She is the author of over 150 books. She is the recipient of the 2019 Haydée Santamaría Medal from Casa de las Americas in Havana, and the prestigious 2019 Poeta de Dos Hemisferios, presented by Ecuador’s Poesía en Paralelo Cero. In 2017, she was awarded the Medal of Literary Merit by Literatura en el Bravo, Chihuahua, Mexico. The University of New Mexico granted her an honorary doctorate in letters in 2019. Born in New York City in 1936, she has lived for extended periods in Albuquerque, New York, Seville, Mexico City, Havana, and Managua. Shorter stays in Peru and North Vietnam were also formative. In the 1960s, with Sergio Mondragón she founded and co-edited El Corno Emplumado / The Plumed Horn, a bilingual literary journal which for eight years published some of the most dynamic and meaningful writing of an era. Robert Cohen took over when Mondragón left the publication in 1968. From 1984 through 1994 she taught at a number of U.S. universities. Randall was privileged to live among New York’s abstract expressionists in the 1950s and early ’60s, participate in the Mexican student movement of 1968, share important years of the Cuban revolution (1969-1980), the first three years of Nicaragua’s Sandinista project (1980-1984), and visit North Vietnam during the heroic last months of the U.S. American war in that country (1974). Her four children—Gregory, Sarah, Ximena and Ana—have given her ten grandchildren and two great-grandchildren. She has lived with her life companion, the painter and teacher Barbara Byers, for the past 33 years. Upon her return to the United States from Nicaragua in 1984, Randall was ordered to be deported when the government invoked the 1952 McCarran-Walter Immigration and Nationality Act, judging opinions expressed in some of her books to be “against the good order and happiness of the United States.” The Center for Constitutional Rights defended Randall, and many writers and others joined in an almost five-year battle for reinstatement of citizenship. She won her case in 1989. In 1990 Randall was awarded the Lillian Hellman and Dashiell Hammett grant for writers victimized by political repression. In 2004 she was the first recipient of PEN New Mexico’s Dorothy Doyle Lifetime Achievement Award for Writing and Human Rights Activism. Recent non-fiction books by Randall include To Change the World: My Life in Cuba (Rutgers University Press), More Than Things (University of Nebraska Press), Che On My Mind, and Haydée Santamaría, Cuban Revolutionary: She Led by Transgression (both from Duke University Press). Her most recent nonfiction works are Only the Road / Solo el Camino: Eight Decades of Cuban Poetry (Duke University Press, 2016) and Exporting Revolution: Cuba’s Global Solidarity (Duke University Press, 2017). “The Unapologetic Life of Margaret Randall” is an hour-long documentary by Minneapolis filmmakers Lu Lippold and Pam Colby. It is distributed by Cinema Guild in New York City. Randall’s most recent collections of poetry and photographs are Their Backs to the Sea (2009), My Town: A Memoir of Albuquerque, New Mexico (2010), As If the Empty Chair: Poems for the Disappeared / Como si la silla vacía: poemas para los desaparecidos (2011), Where Do We Go from Here? (2012), Daughter of Lady Jaguar Shark (2013), The Rhizome as a Field of Broken Bones (2013), About Little Charlie Lindbergh and other Poems (2014), Beneath a Trespass of Sorrow (2014), Bodies / Shields (2015), She Becomes Time (2016), The Morning After: Poetry and Prose in a Post-Truth World (2017), and Against Atrocity (2019), all published by Wings Press. Time’s Language: Selected Poems (1959-2018) was published by Wings Press in 2018. Many of Randall’s collections of poetry have been published in Spanish translations throughout the hemisphere.