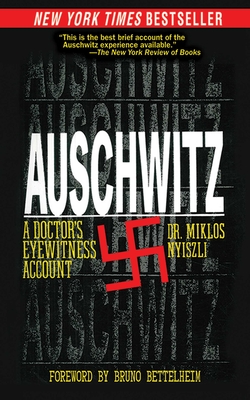 By  Miklos Nyiszli , Translated by  Tibere Kremer , Richard Seaver , Introduction by  Bruno Bettelheim
Paperback
$ 14.95
Out of Stock In Store (Available to Order)

A New York Times bestseller. The memoir of a Jewish doctor forced to assist Josef Mengele. Shocking and important.

When the Nazis invaded Hungary in 1944, they sent virtually the entire Jewish population to Auschwitz, the concentration camp whose horrors over the years have become synonymous with the Holocaust.

A Jew and a medical doctor, Dr. Miklos Nyiszli was spared from death for a grimmer fate: to perform “scientific research” on his fellow inmates under the supervision of the infamous “Angel of Death”: Dr. Josef Mengele. Nyiszli was named Mengele’s personal research pathologist. During his work, he was eyewitness and involuntary participant, chief physician of the Auschwitz crematoriums, and drafted number affidavits of dissection and forensic finding (signed with his own tattoo number). Miraculously, he survived to give this terrifying and sobering account.

Written in 1946, soon after the end of World War II and the liberation of the concentration cames, Nyiszli’s work was one of the first books to tell the horrors of Auschwitz. It has been numerous languages and has sold hundreds of thousands of copies.

“An honest book, and an important one. It tells of events which though gruesome, need to be sold and retold until their meaning for our times is accepted.”—Bruno Bettelheim, from his Introduction

Miklos Nyiszli was a Jewish prisoner/doctor along with his wife and young daughter, who was transported to Auschwitz in June 1944. He died in 1956.

Richard Seaver was a publisher, editor, and translator. He passed away in 2009.

Bruno Bettelheim was a child psychologist and writer of international renown. He passed away in 1990.